I am pleased with myself. Can you tell? I'm all smiles because I am so close to finishing up my cousin's quilt. It's a little behind schedule! 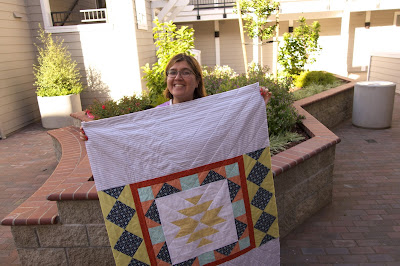 I wasn't sure how the quilting on this was going to go as I was piecing everything together. My go-to would have been horizontal lines but that felt unimaginative to me for this one. Still, I didn't want it to compete that much with the panel in the middle because darn it I'm proud of that part!

An idea descended one evening when I decided to quilt it in a sort of sunburst pattern to tie in with the trendy tribal vibe. Basically I have a set of nested V's going North, South, East, and West radiating out from the center of the squash blossom block. It's genius. Not only that, but I totally lucked out and picked 3 inches as the spacing. Why lucky? Because somehow I intuited the exact spacing that would line up my quilting lines with most of the features on the central medallion panel. It's not a big deal, but satisfying that it ended up that way. 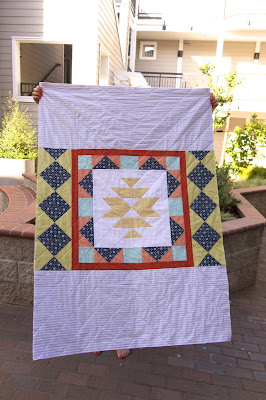 Dave was kind enough to venture outside with me on a somewhat windy day to snap these pictures. You have to wait until the quilt just floats on the wind like a seagull. Apparently that's the ideal moment. In this picture of the back it's easier to see the quilting pattern. It's not complicated, but it really looks great. I started each line in the middle and stitched out to the edge to avoid any directional stretching or slippage. 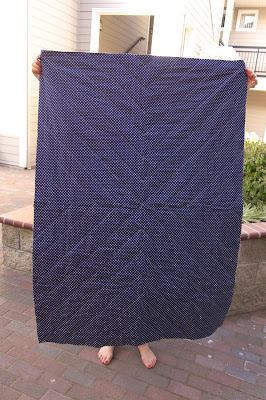 I was hoping to use the backing as binding but it turns out I basted a bit to close to one edge for that to be a viable option. Darn. I'll have to look around and see if I have a suitable binding fabric to finish it off this week.
Posted by Alia at 11:46 PM