I finished this cowl not long after I wrote about it last and had the light to snap a couple pictures just today. The coral color reminds me of some of my favorite tulips I saw in the Keukenhof, so the moniker Tulip has stuck. 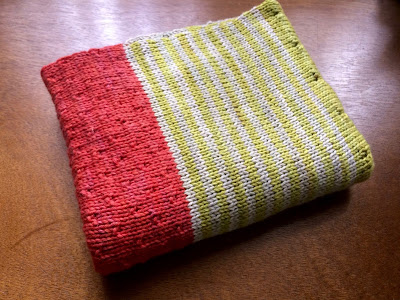 I've mentioned this before, but I really like the yarn. It is buttery soft and squishy with some real weight to it. It also drapes beautifully. I could definitely see this yarn working up into a nice spring/summer garment, or any of the shawls I like to work on so much. The colors are so pretty and have some nice subtle tonal variation. I may have found a favorite gray! The cotton/silk blend was an experiment to see if I liked working with and wearing something I'm less sensitive to than wool. Thumbs up! I don't think it will work for every project since it doesn't hold much 'structure' but I'll be happy to work with it some more. 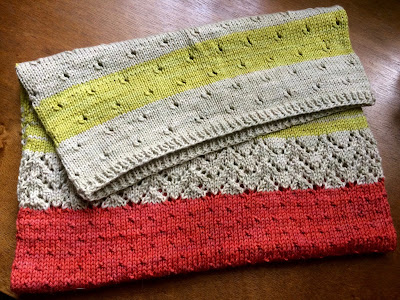 The pattern was a fun one with not only stripes of color but also stripes of differing patterns that kept me wanting to knit until each next section. I think my favorite bit is that lace panel in gray, small but mighty. In the end the whole thing is rather like a colorful chimney. I'm looking forward to wearing it some time soon. I think it will look rather nice against navy. 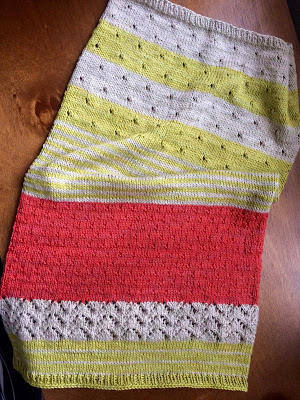 I have to give credit to Dave for picking out the yarn, the colors, and the pattern. We were wandering around a new yarn shop and this was one of the samples. It was worked up in super soft cashmere yarn in similar colors - the gray and green were darker and the coral was more of a pink. At any rate, we both really liked it and Dave helped me pick out the yarn as I wandered around the shop wondering what I wanted to make with other things. "You really like that. So you should make that" Makes so much sense, doesn't it?