It's really too bad that I didn't get a picture of all the things I made for Dave's family last Christmas because they were pretty awesome. So awesome that Dave wanted to pack the up and ship them off before I took pictures! :) In addition to the couple pairs of socks I've already written about, I made my sister-in-law a hat, my brother-in-law a set of fingerless mitts, and my mother-in-law a scarf. The scarf at least I have a picture of (as it dried from blocking late on Xmas Eve....): 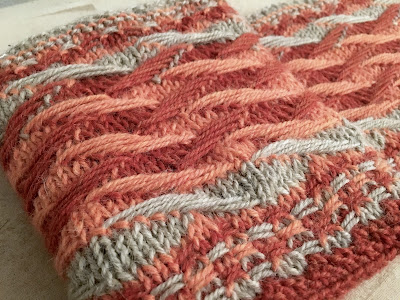 I'll start with the mitts. Dave requested them for his brother after I finished his Endor gloves that he loves so much. Knowing that I wasn't going to have time to finish the fiddly finger bits, I went looking for another pattern and found Lambing Mitts, some super cool open top mittens. I used the same heavy duty yarn, and they turned out looking much like Dave's pair, only no fingers. Success!

The hat and the scarf were both patterns from a slip stitch knitting book of patterns from my new local yarn shop in Los Altos. The hat went SUPER fast, and I made it with forest green yarn that I had in my stash from another project. Yeah for stash busting. The amount of yarn (about half a skein) was just enough to finish the Siska Hat and it took me like a day (and an extra half a day to tink back and add in a repeat I skipped). With the pattern and the color, it ended up looking like a pine tree forest all around the hat. The fit was great (on my head at least) and it was a hard one to give up.

The scarf, as you'd think, took longer to make. It is interesting in that you don't knit width-wise and make it longer; you knit length-wise and make it wider. That means each row takes forever, but it isn't as mentally painful as the "normal" way of making a scarf, in my mind anyway. Dave picked out the colors, which I think are really great and a departure from what I would usually pick. The pattern was really fun to knit with all the slip stitching and color changes keeping it interesting. Sure enough (just to keep up with my m.o. of course!) I finished it on the plane to Louisiana and weaved in ends and blocked it the night before Christmas, letting it dry until morning.

Whew! Hopefully this will clear up my writer's block now that I've got this post out of the way. I haven't been doing too much this year, but I have been getting some crafting in here and there. More to come.