We were so lucky this holiday season to have my parents and nieces come stay with us for two weeks! Before we moved our trips involved a lot of going out and exploring the Peninsula and San Francisco in part because it's fun and also to be honest our place was small for guests. Now that we've moved further from the city and have more room, we had a lot of fun exploring the new town and local area as well as sticking around home to cook, craft, and putter around. It was marvelous! They left yesterday, but I've enjoyed looking back on some of the projects "the girls" got up to. 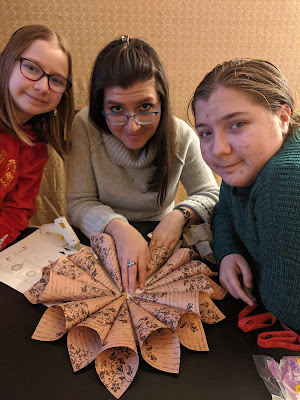 First things first, Mom brought a kit to make a paper wreath for our French-ish bedroom. There was a lot of hot gluing involved, and Mom was an expert paper roller. The girls had fun trying on the cones as unicorns and seeing if we could put pom poms in them to make them ice cream cones instead. It turned out really well and is hanging in my craft room waiting for us to finish up our bedroom so it can find a good home. 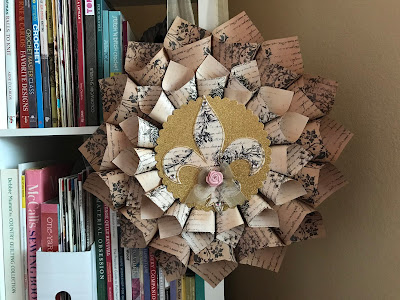 Oh, did I mention pom poms? We made a lot of pom poms. At first it was kind of just something fun to do with some scrap yarn I had. We even went out to Joann's to get some really fluffy yarn to make huge ones. We made long hangers on them and hung some from our chandelier in the dining room for a festive atmosphere. (Anthropologie, eat your heart out!) Then Mom and the girls pulled up some of their Pinterest ideas and showed me a bunch of pom pom wreaths. Well. That had to happen. 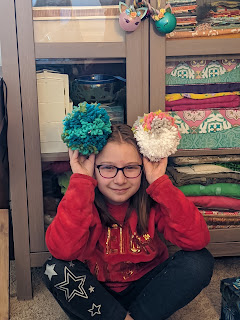 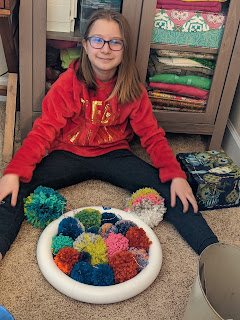 Observant viewers will also see another project that I don't have great pictures of - unicorn ornaments! We had a lot of fun with glitter paint, sculpey clay, and hot glue to make ornaments that look like whimsical unicorn heads. And narwhals. And a kitten. They were well worth the effort. Back to the pom pom wreath. We spent a few minutes here and there over the days making pom poms until we thought we had enough to fill out a 16 inch styrofoam wreath. We've got sizes from about 5 inches all the way down to an inch and a half. I thought we'd hot glue them on, but instead we ended up using a combination of tying and pinning to get all the fluff balls fixed onto the wreath. It turned out looking super cute and is hanging up on my craft room wall where it makes me happy every day. 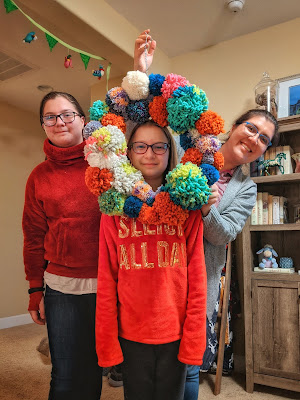 One of the last nights everyone was here, mom and daughter got to do a project together just the two of us. Mom had found a tutorial for these Danish stars and wanted to try making some. They take just four strips of 2.5" wide fabric to make and the only sewing required was to sew the strips in half longways so you had a thin strip with fabric print on both sides. Then essentially it was a folding game. We combined a few different prints I had into four stars, one for each crafting gal we had. 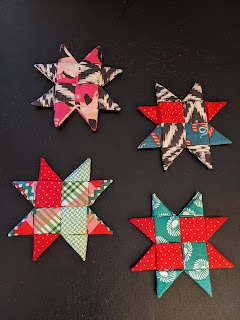 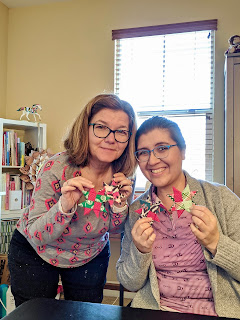 When we were finished, Mom had the bright idea to hot glue a twine hanger into each of them so we could use them as ornaments. Mine quickly found its way to the tree. 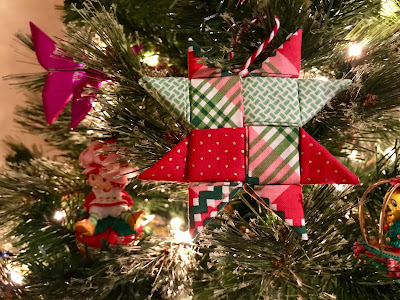 And of course, no trip is complete without a last minute project. This one finished literally minutes before everyone headed out the door to the airport. I wanted to make Mom a julekuler this year but wanted her to pick the pattern. I forgot until the last night - yikes! 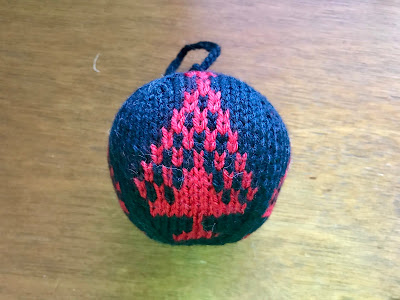 Luckily, it only takes me a couple hours to make one at this point since I've made so many by now. Mom picked this pretty tree motif and I started it one evening and finished it off, stuffed it, and made a hanger the next morning. Phew! 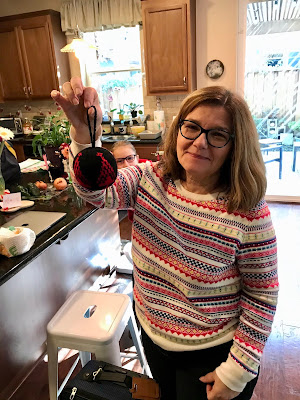 It was a wonderful holiday and end to/start to the year.
Posted by Alia at 4:00 PM