I have two large quilts going right now, and they are both in the quilting stage. I'd like to get at least one done before acquiring another big work-in-progress. Here is a quick peek: 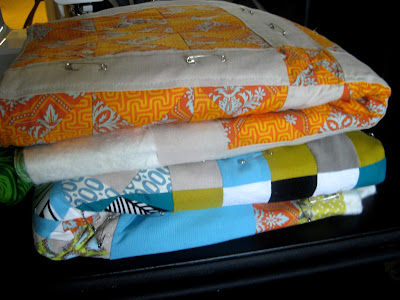 I've worked a little bit on my Modern Medallion quilt and have finished the center and one side of the patchwork tile and on-point square borders. Three more of those to go, and I will get to have fun filling in the vast blue borders. After a little bit of thought and considering the colors of perle cotton I have, I decided to go subtle with the quilting. I'm using either a pretty blue-green or an off-white depending what I'm stitching on. I'm wondering if it's all going to be worth it because it blends in so well, but for sure the stitches add a certain texture wherever they're sprinkled. 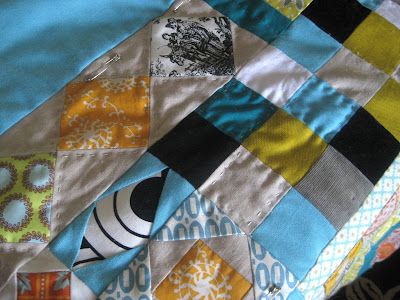 Unfortunately I have a limit to how long I can stitch on this one because my hands start to hurt. Bummer. It's looking good though! Just taking for-ev-er. I told Dave this might be my only hand quilted project ever. That's probably an exaggeration but it is certainly how I was feeling mid-stitching. I'll be really excited to see this finished, though. It will feel good to know I stuck it out.

We are so stoked to get our picnic quilt all finished up that it's totally motivating me through what is usually the "let it sit for a while" stage. Last week I finished the top, and Monday night I basted it on the card table. After a little bit of inner debate, I'm using leftovers from a swirly green Ikea duvet cover for the back. I sandwiched it with some Fairfield Nature-Fil bamboo blend batting in the oh-so-convenient 60 x 60 size. So far this is the only brand I've come across in stores near me that is a large square, a shape I apparently really like for quilts.... this will be my fourth in this size. Buying a larger piece and cutting it down is fine since I get big ol' scraps to play with later, but I really like being able to use these straight out of the bag. 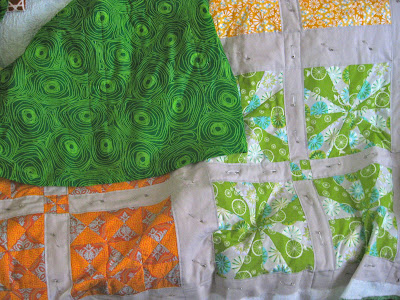 I used a pretty robin egg blue thread and my longest straight stitch to edge all the sashing which doubles as a nice quick way to fix everything in place. (The pins could probably come out at this point.) I started out doing some loopy FMQ in the orange hourglass blocks, but did not like how it looked at all. I'm not sure if it was the quilting itself or the blue thread standing out too much, but I disliked it enough that I had the patience to sit and pick out all the stitches. There is a large activation barrier for me to get out the seam ripper, so that's saying something. I think I will do the quilting in the blocks in white, but still not too sure I want to go the loopy route. Or maybe I'll just leave it as it is? It's in "time out" on the couch for right now.

Linking up to WIP Wednesday at Freshly Pieced
Posted by Alia at 7:00 AM