I like many different types of quilt styles, but one of the things I like the best is that really creative quilting adds a lot to project whether it's pieced simply or a complex design. Some of my favorite examples include this, this, or even this. All are lovely examples of projects I like for their colors and composition, yes, but what really grabbed me was the quilting. "Wow" moments, you know?

I have had grand visions of trying out something equally stunning on the Amsterdam quilt but I started and just got stuck. I tried free motion quilting in the light orange planetarium block and hated it. Part of that was because I'm not adept at it yet, but part was just because it didn't look right to me. I thought about changing the thread color from light blue to white so it would blend better, but decided that was somewhat contradictory to my desire for the quilting to show. What to do? I went back to straight lines. 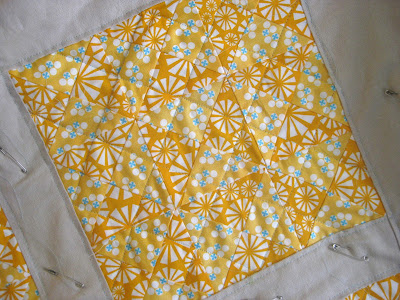 I quilted four sets of diagonal lines equidistant between the seams of the squares that show up if the block is placed on-point. The result looks a little bit like a granny square pattern, or what kept occurring to me as I sewed was plaid. An imperfect analogy, yes, but a satisfying one. As I finished one square I felt in a way like I had given up too easily and retreated to my default, but the more blocks I finished the more I like what I picked. 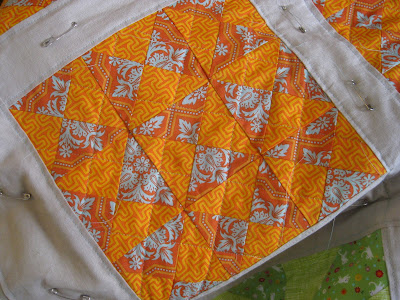 I like the way the geometries of the block and the quilting play with each other. The angles of the lines complement the overall angular piecing in a pleasing way. The hourglasses are still apparent, but now the quilting suggests four patches and half-square triangle units that combine and form little pinwheels inside bigger pinwheels.  Kind of neat, after all. 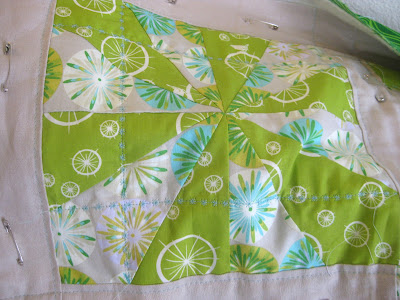 I thought quite a bit about doing either concentric circles or octagons in these green blocks. Then I decided why not use one of my favorite features about my machine? I love the umpteen decorative stitches that I have available to me but hardly ever use them. There's a way to spice up straight line quilting! Easy on my shoulders (reduces quilt wrangling) and attractive to boot! I'm hoping four lines in each block will look a little bit like a window pane to "watch the raindrops through". I even found this neat asterisk stitch that echoes the blue and gray fabric and looks like rain splashing in puddles - of which there was a lot during our Dutch Spring. Awesome. This quilt is going to be so full of little symbolisms it is ridiculous.

I ran out of thread, so I had to stop mid-asterisk which is too bad, really. I was on a roll. I switched to white to make and attach the binding to the front but I'll wait to flip it to the back until I get more blue thread. 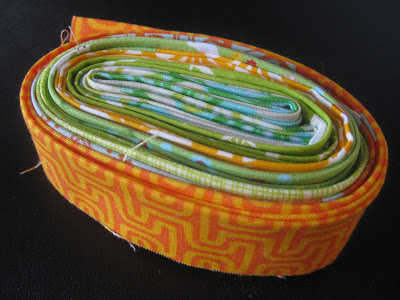 I think all in all I do like "all over" quilting and designs that don't necessarily register geometrically with the blocks of the quilt but I just have a hard time figuring out how to do these things in my own work. I also really like the look of simple lines. What's a girl to do? Keep experimenting, I guess!