Well then! How quickly time flies and poof it's June already. Thank you, dear readers (and bee mates!), for bearing with me through what has been assuredly one of my busiest months in recent years. It was sort of a monochromatic month, with just a splash of color thrown in. Not my usual M.O. for sure! 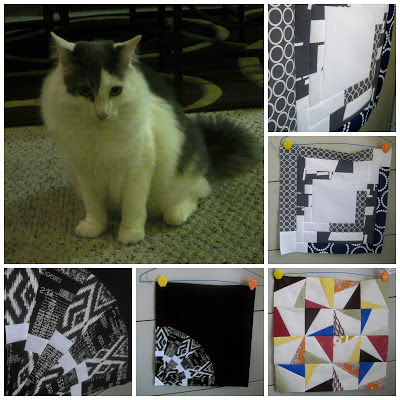 I did not do anything craft related this month aside from complete some bee blocks. I especially like the black and white quarter-dresden block I improvised. I've got an inkling of an idea for another version of that one. For another time, though.

The cute little ball of fur is our remaining cat, Newton. We adopted him in January as a companion for Jack, but now he's my project. He is shy, just like Jack was in the beginning so I've been spending lots of time on the floor convincing him that pets are the best thing in the kitty universe. I think he's drinking the Kool Aid. He is only a year old, so he has a long time ahead of him for neck rubs and lap time. I'm sure it will come. He has definitely been a great help to me this last month.

Though I don't usually write about work things in this space, this May was an especially important month for me because I defended my thesis! May 21st started out with nerves and ended in handshakes, happiness, and an impending PhD. I am participating in graduation this June and will turn in my final version of the written thesis by the end of August after which I'll officially be "Dr. Alia". I may even post a picture or two of me in the funny hat.

Looking to June, I've got a bevy of bee blocks to make, and a baby blanket to quilt and bind. Looks like it will be the month of the letter B. It was so nice to get back behind the sewing machine at the end of May, and it feels good to wipe the slate clean from a messy, stressful Spring and look forward to the Summer.
Posted by Alia at 10:17 PM

Email ThisBlogThis!Share to TwitterShare to FacebookShare to Pinterest
Labels: finish