This has got to be my favorite thing I've made so far this year. It was fun to pick out colors, fun to work up, and I absolutely love the way it turned out. 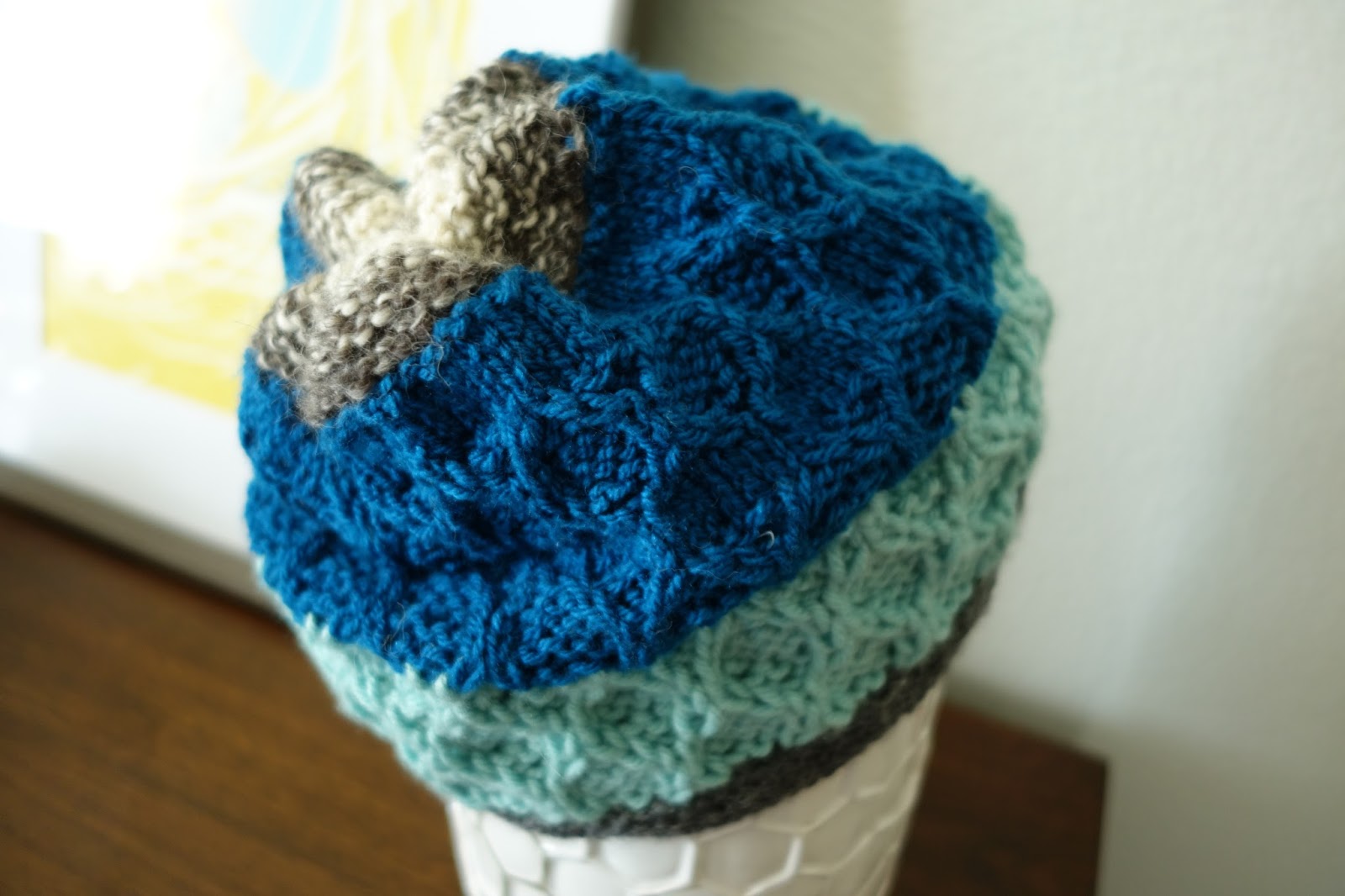 Ysolda Teague, a designer whose work I quite enjoy, came out with a new collection of patterns called Knitworthy (link to Ravelry page). Every two weeks a new pattern comes out, and they are small but packed with creative punch and style, meant to be manageable pieces to make as gifts for "knit worthy" folks in your universe of people. Bronntanas is the first and only one I've managed to make so far but there have been 4 lovely designs released to date that all have some element that is new to me. So not only are these great designs, quick to do, and addictive like popcorn (if this one is reflective of them all), but I will learn along the way! Very excited me.

There are all sorts of awesome things about this hat. First off, yarn leftovers got used up. Second, I really like the honeycomb pattern and resulting texture. It kind of reminds me of the protein assemblies from my graduate work, in a good way. And the fact that I can look back fondly on that is a coup indeed! Third, I love slouchy hats. Fourth, I learned how to do single stitch cables without a cable needle. Skills! 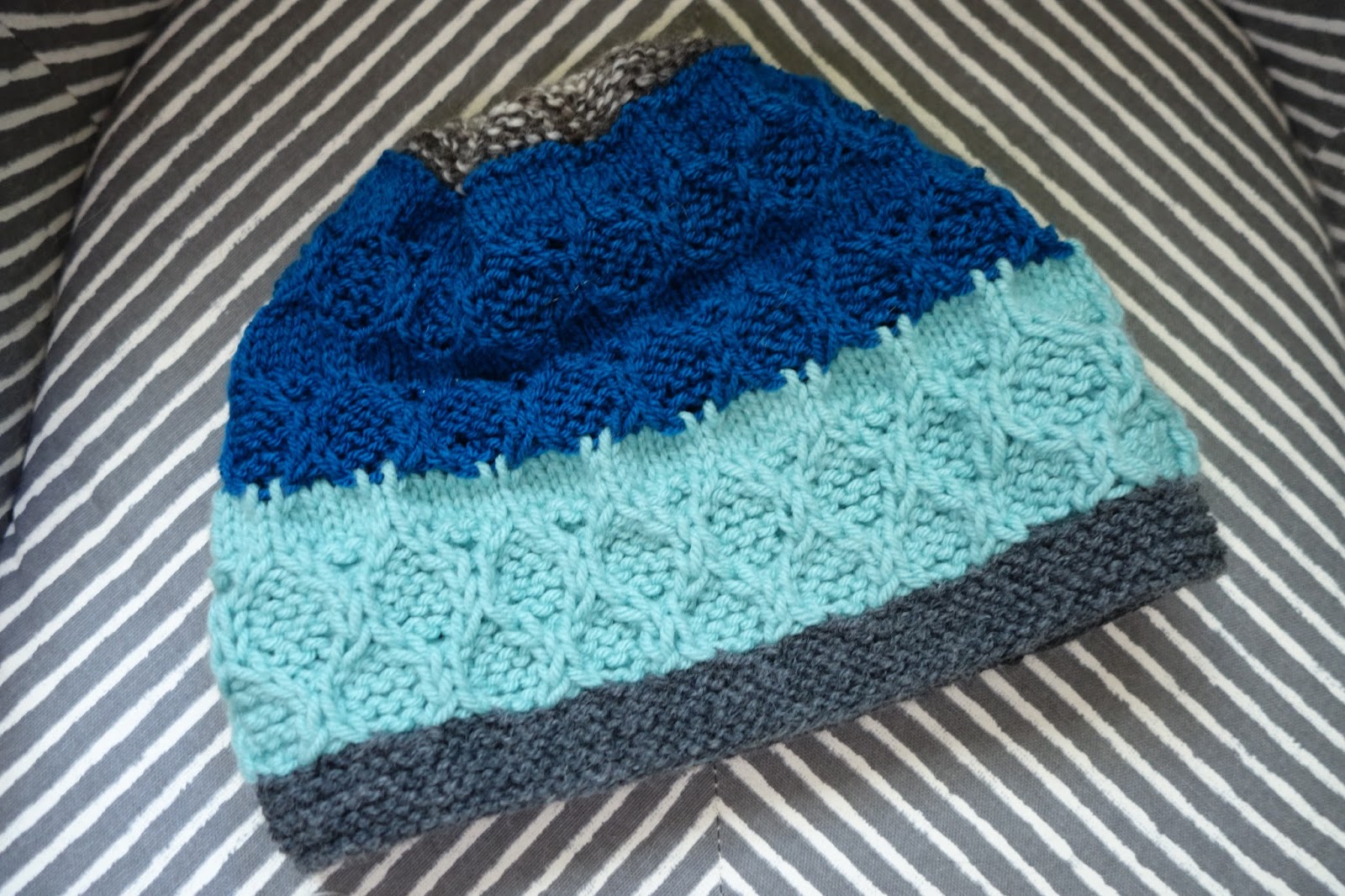 After examining my stash for yarns that were appropriate, I decided to use multiple colors and keep them all in the icy/wintery color genre. I was originally hoping to arrange them in a pseudo-gradient starting with the gray then dark blue, light blue, and finally the white. Turns out the dark blue yarn is lighter weight than the light blue and it the piece would have been weighted funny if I had used the heavier yarn higher up. Mixing yarn weights worked out ok, but I did have to rip out and use the light blue first. Coupled with the fact that my first cast on of the brim resulted in a HUGE circumference I had to start this hat three times! Luckily it's an addictive knit and I really liked the design, or else I probably would have given up. I especially like the way the crown of the hat cinches together and how the piece of CascadeEco I had leftover makes a nice color progression from variegated gray to pure white in the center. I could not have planned that better. Totally worth the up front perseverance.

Because I started on this September 1st, I named it for a song my husband wrote way back when we first met. The refrain goes "Cruel September threw her last leaf at me" which I think it just a really neat mental image. I hum the tune every time I look at the hat.

I ended up knitting the size medium and it perfectly fits my head, in a non-grippy hang-on-to-your-hat-in-strong-wind kind of way. Based on the pictures in the pattern, it looks like the design is meant to provide a loose fit at the band and it does that very nicely. 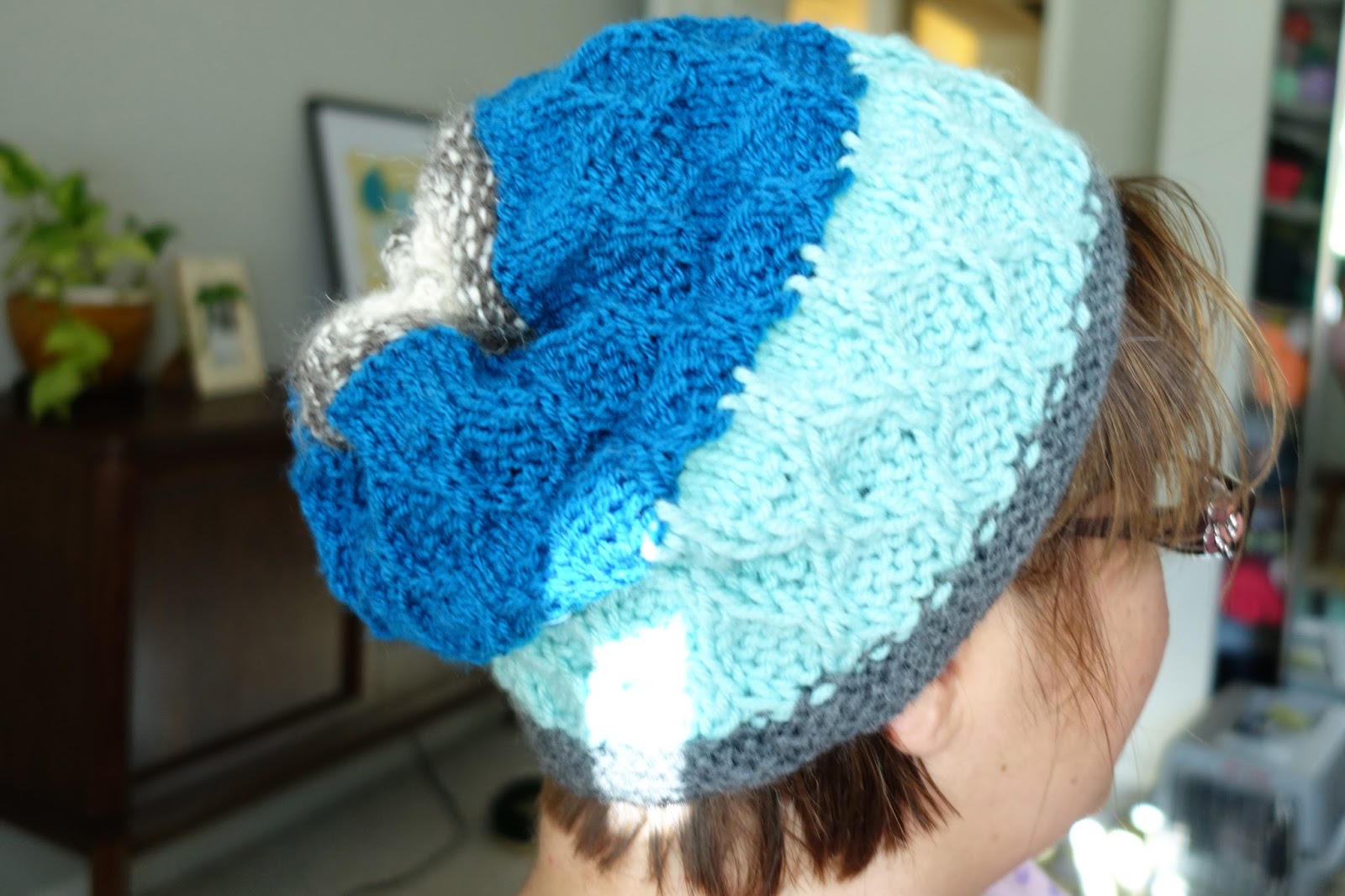 This hat will forever remind me of Scotland, a place I want to see so much. I have the impression I would love it there, though I can't really explain why. It's just a feeling. Why does this hat recall the land of lochs? Well, the designer hails from there, for one. But more because I knit this during a time when I was rabidly reading everything I could about the Scottish referendum for independence. Also, Outlander. Total coincidence. Still, quite a bit of Scottish-ness happening all at once. Regardless of how you feel about the results of the vote, you can't argue that the whole thing was truly momentous. This is definitely one of those cases where thoughts and ponderings get woven into the fabric with every stitch.

I really did start this out intending to make it as a gift, but I'm not sure this version is going to manage to leave. I will definitely use this pattern again and given that it's quite a fast knit, I don't see why I can't keep this one and work up another! Then again, it matches so well with a scarf I gifted earlier this year that I know exactly who might get it. Decisions decisions….
Posted by Alia at 8:00 AM