I finished Dad's scarf in time for the holidays! I'm feeling pretty accomplished. That's a lot of knitting, folks. I don't really want to think about how many episodes of Arrow led to the finishing of this scarf. Let's just say I'm feeling pretty caught up! 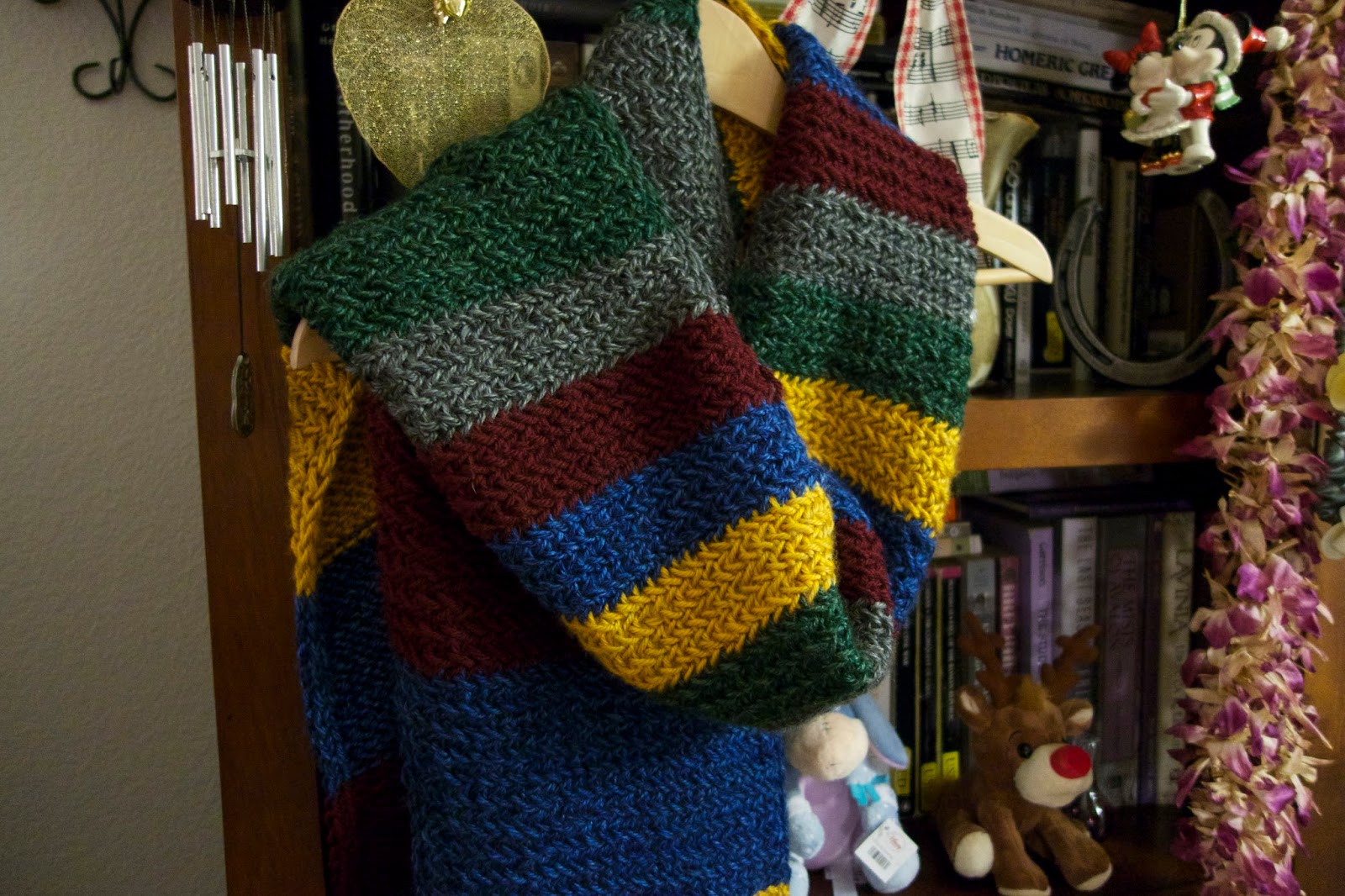 Scarves are actually pretty hard for me because they are so long. I lose attention about 1/3 of the way through and just have to power through the rest. (The last scarf I started ended up as a collar!) Thankfully the stripes kept it interesting. "Just a few more rows until I get to switch colors!" was said many times. Hey, whatever works. Plus, the motivation to finish it in time to ship it for Christmas was pretty strong. Also, Arrow. I love me some super hero serials. But that's another story. 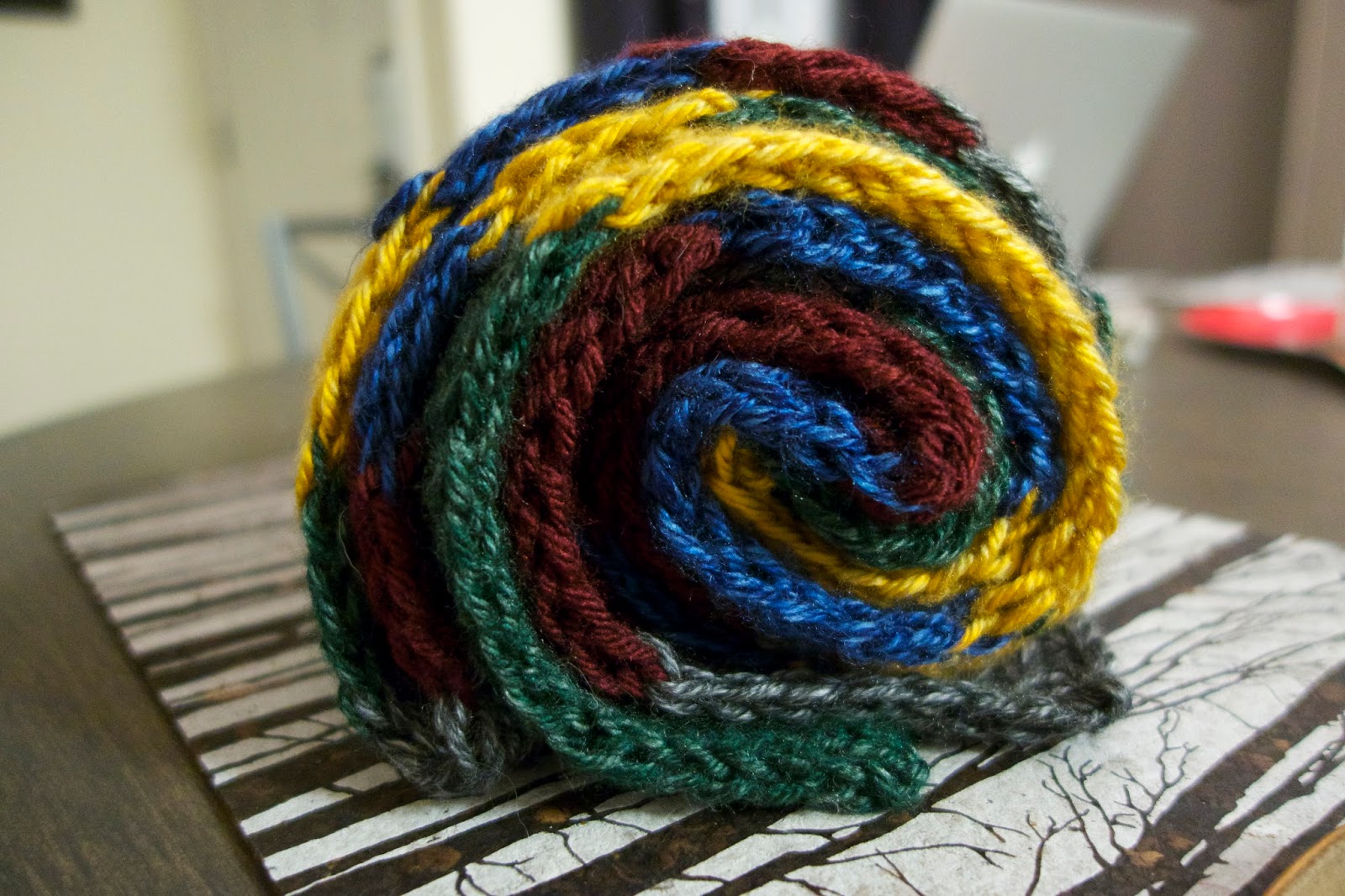 I started out doing large blocks of color and then remembered Dad wanted kind of random stripes, so I ended up with three sections: large blocks, thin stripes, medium stripes. It's not quite a Dr. Who scarf, but something approximating what I think he really meant by "knit me a Dr. Who scarf". It has stripes, many colors, and is quite long, but not too many colors, a little bit of order to the stripes, and not so long as to be absurd. 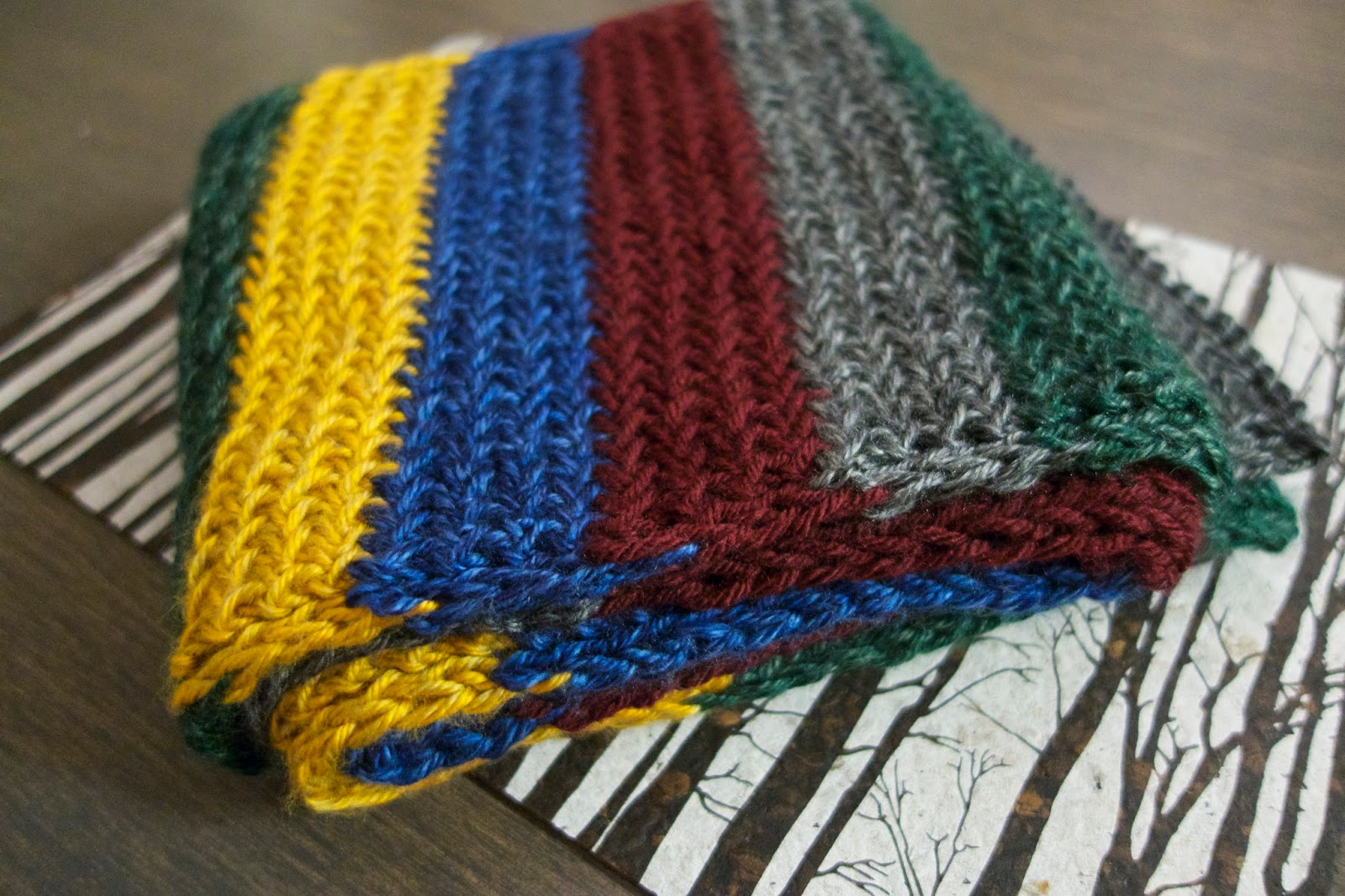 As a reminder, this is Purl Bee's Mini Herringbone Scarf pattern and is knitted in acrylic Lion Brand Heartland yarn. I knit it on size 10 bamboo straight needles (more details on my Ravelry page). The herringbone texture is lovely and the fabric is nice and thick which makes for a warm cozy scarf. It's not really what I would call a true reversible pattern, but the back has nice even purl bumps that look quite neat and tidy with the exception of the inevitable color change strip. 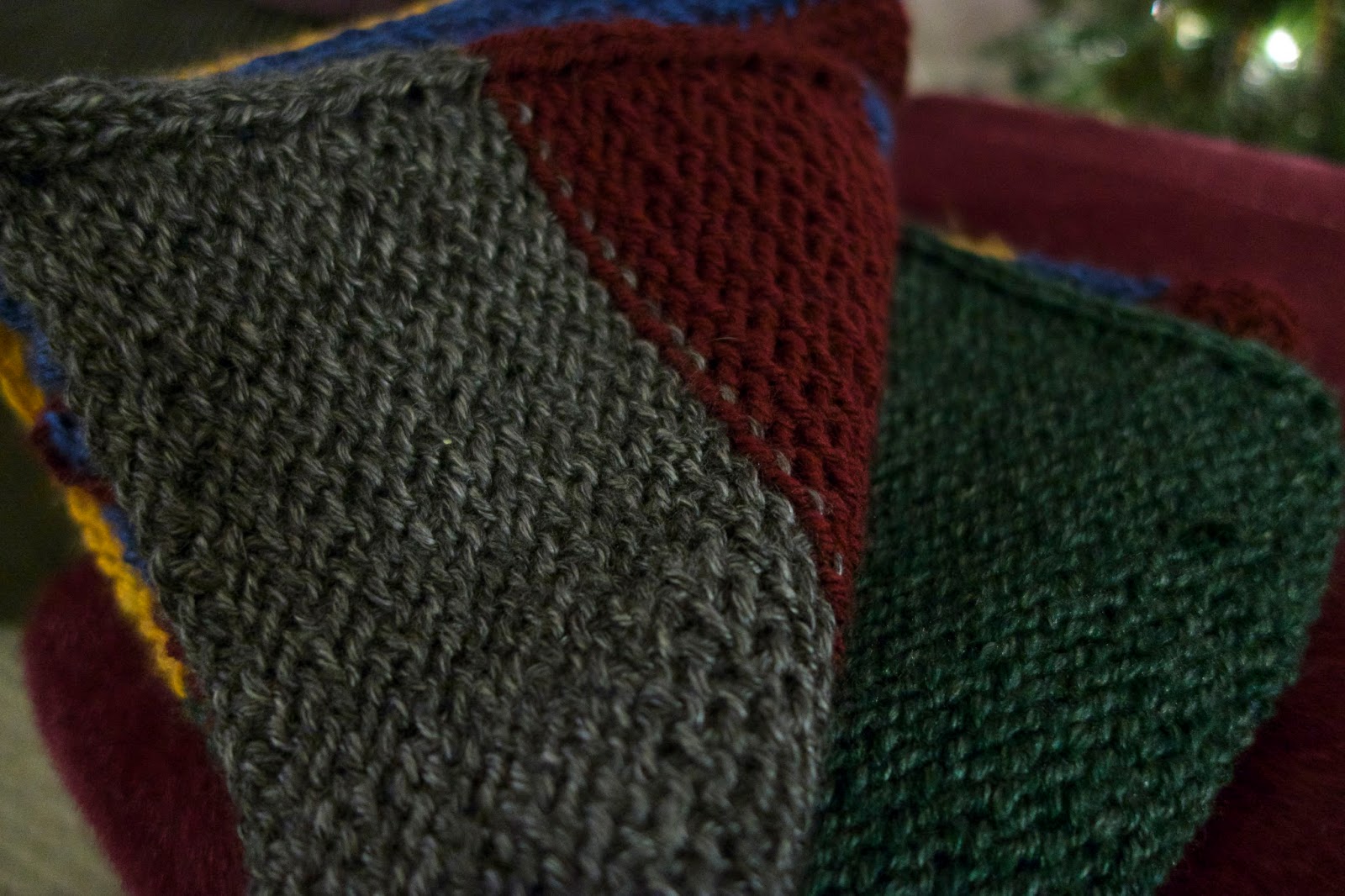 I got the ends woven in with a little effort (allll the ends!) and kind of stretch-fluffed it out in lieu of blocking. Unlike some folks who had written comments about their efforts on Ravelry I didn't have any issue with the shape distorting into a parallelogram so I didn't feel the need to further mess with it. Plus Dave said so. I listen to the husband's advice when he offers it! 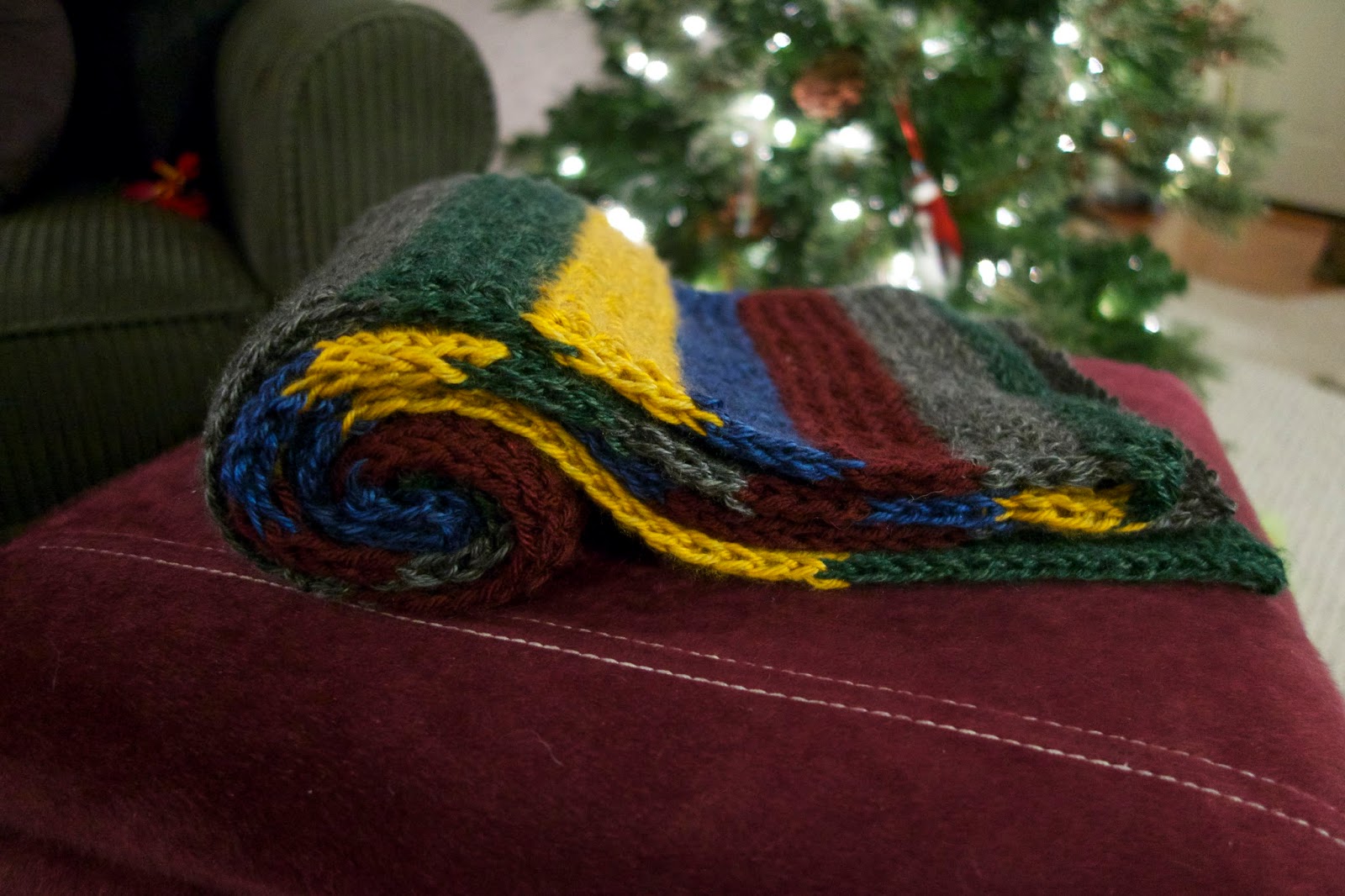 I actually really like when he chimes in, especially when it's comments like "wow that's really nice" or "you're so darn good at knitting things" as I got during the process on this one. Maybe he's fishing for one of his own?? I've got some gloves in the works for him whenever I get around to winding the yarn so hopefully he likes those just as well. As for this bad boy, he's all packed up and shipped off to go under the tree in Chicago! I hope it likes cold weather. One should think so, it is a long and fluffy scarf after all.
Posted by Alia at 8:00 AM