I finished knitting this in December and just got the buttons on it now. Better late than never! Karenina is a lightweight collar made from Dream in Color Smooshy in Fierce Scarlet. It looks fierce, too! Just the thing to match Anna Karenina's fiery disposition in Tolstoy's book. I knit this while reading the book so I could watch the movie. Dorky, I know, but every movie adaptation of any book I have seen has suffered from a lack of context if I can't remember the book. I had never read Anna Karenina before, either. It was good! I think I have a thing for Russian literature. I digress. 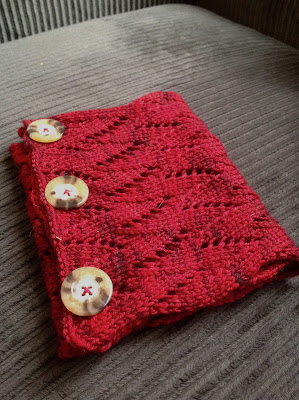 The hold up was mittens. I was thinking of making a pair of mittens to go with this collar, but in the end I didn't like what I had after making one. So I did what any good knitter would do and put it away frustrated. I even had buttons picked out! Sad. At any rate, in a fit of motivation to finish things this week, I sat down for the requisite five minutes and sewed on buttons. It just took a little bit of thought to line everything up, and bam. Done. I sewed the buttons on using embroidery floss rather than yarn, which I think is less bulky looking and sturdier. 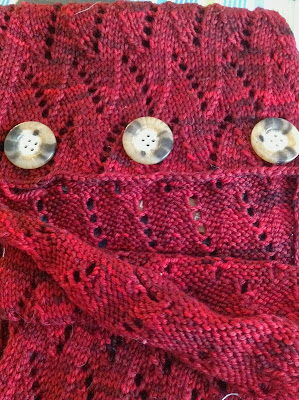 The collar is about 6 inches wide and 20 inches long. I adapted a free pattern for a scarf called Winter Flame, details are on my Ravelry page. Basically I knit the scarf pattern and then added a short stockinette section to house some button holes. I chose the buttons to tone down the formality a bit. This would look quite elegant with some filigree buttons or something similar, but I picked these big chunky tortoise shell buttons to make it a little rustic. 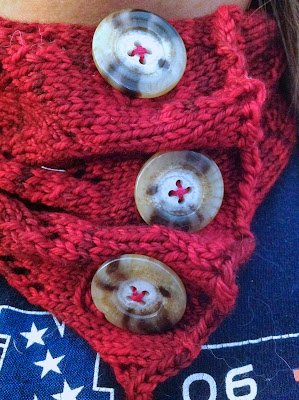 I still have about half a skein of this yarn left... I may end up making some gloves to go with it, after all!  Until then I'm going to enjoy rocking this out solo on chilly fall nights.
Posted by Alia at 8:30 AM