There's been a theme around here lately: vacations are really productive. This is the third installment of the accidental "what I did on my summer vacation" series. I finished my cousin's baby quilt! It's a little later than I hoped, the baby was born in June and this was early July, but it's big enough that the little munchkin will be able to use it well into her toddler years if she wants. It's roughly 40" x 80" if memory serves. 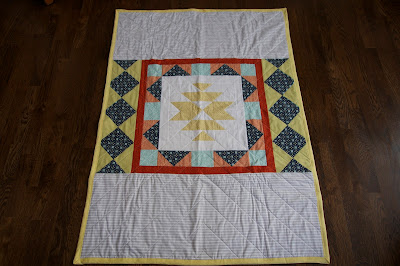 I decided to call it Prairie Blossom. We spent time camping out on the Indiana prairie on this trip, and during the summertime I'm reminded of how close the Illinois prairie actually is to my parents house! The central block of the medallion is a Squash Blossom block. So, concatenate the two and you've got Prairie Blossom. 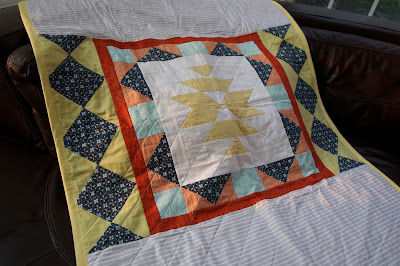 This piece is special not just because of the little one it is intended for, but because it represents to me a stretching of my quilting abilities. Beyond roughly following a tutorial for the squash blossom, I improvised my way through the rest of the quilt top and ended up with a design I'm quite proud of! I'm glad I took copious notes, because I don't think I could make it again from memory. 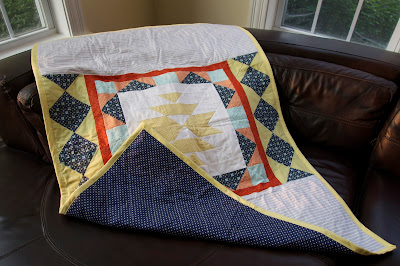 I used a single piece of navy and white polka dot fabric as backing and quilted nested V's in each of the compass directions (more about that in a previous post). I hadn't finished binding the thing by the time this vacation rolled around, so I figured what the heck I'll just pack the trimmed quilt in my suitcase and recruit Mom's sewing machine to help me finish it. We went to Joann's in search of some binding fabric and in the end I decided that I didn't want to spend a bunch of time cutting and pressing my own binding. We found a pretty lemony yellow pre-made binding and decided that it would look very nice to contrast with the backing and to finish off but not compete with the front. 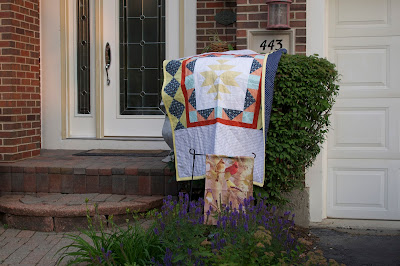 I had the binding sewn on in no time and triumphantly went outside to photograph the quilt in Mom's garden. I left it behind with for her to get to my cousin, who lives in the area. I hope she likes it!
Posted by Alia at 8:00 AM