Here is another knitting finish. This one must be a record for me -- I finished knitting it in a month and it took me less than two weeks to actually block it! It's a miracle, people. 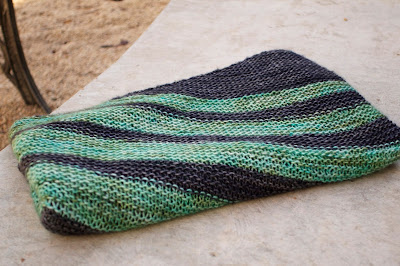 I pinned this out using a combination of my blocking boards and the floor since it was a bit bigger than my measly nine boards could accommodate. This made me miss the big play mat set at Mom's! At any rate, it was stuck horizontally to the floor so I used my iron instead of my hand steamer to steam block it. That worked ok, but I am not convinced I got as much steam through the fabric with each pass. I did something like four times over before I felt like the garter stitch wasn't just going to spring back into place once I took the blocking wires out. I probably could have stretched it out more aggressively but it still turned out to be 72" wide and 20" deep which is actually larger than I was expecting. The edges as-written were no problem to stretch, and I used an Icelandic bind off from my Cast On, Bind Off book at the end which gave me a really nice stretchy but still structured edge to work with. That one was new to me and a little slower than a regular bind off, but I'll be using it again. 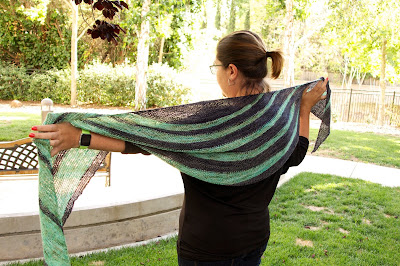 Given the surprise size, I'm really happy with how this turned out. The pattern itself is quite modern looking with its simple angled lines, and the colors I chose turned out to be sufficiently edgy as a combination. The blue-green (Big Sur) is an especially lovely shade that I'd be happy to use again on something else. There are colors varying from deep turquoise to brownish-green along the mostly minty aqua fiber. This gives the final fabric a subtle variation in tone which, when considering the name, could definitely be likened to the kelp floating along in the ocean waves off the coast. In fact, the colors remind me very much of this picture Dave took off of the pier at San Simeon last year: 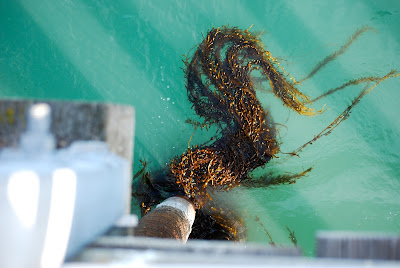 The picture above popped into my head one evening while I was working along, so for a short time I figured it would end up being simply 'Kelp'. But as I've mentioned before, I've recently been experiencing Scottish culture through the written word while reading the Outlander series. The word kelpie came to mind. A kelpie is a water spirit that inhabits the lochs of Scotland, most often in the form of a horse. Sounds like my kind of spirit! As soon as I first considered it, the modification stuck. And so I give you Kelpie, my latest yarny finish. 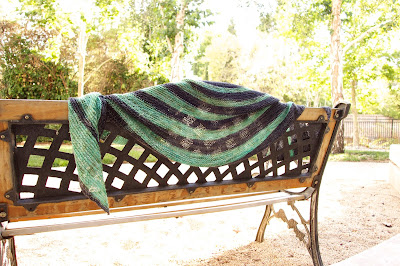 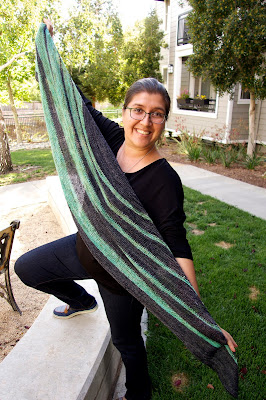 Pattern: Pendulum (Ravelry link to my project page)
Yarn: Madelinetosh Tosh Merino Light in 'Big Sur' and 'El Greco'
Needles: Size 6
Dimensions: 72" across the top and 20" at the deepest point
Posted by Alia at 8:00 AM