The moniker for this post comes from an inaccurate, but hilariously consistent, read of the pattern name: Violet Waffles. Turns out if you glance at the pattern title quickly, it - for some reason - reads as Violent Waffles. No waffles, violent or otherwise, were harmed in the making of this hat. 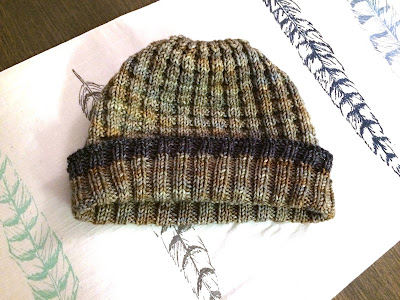 I started this just before we left for Chicago so I would have some easy knitting to do on the plane. It was supposed to be modified to be a double layer reversible hat (essentially two hats joined together at the brim). In the end, when Dave tried it on, he decided he would rather leave it just the one layer but with a longer brim than I made so he could flip it up and still completely cover his ears. Because of Plan A: double layer hat, I had used a provisional cast on so fulfilling that request was no problem. I forgot that the stitches would be offset by a half stitch when the provisional cast on was unzipped. Upon realizing that I thought that maybe I'd have a problem with the ribbing join turning out wonky, but I tried it out for a few rows and it doesn't look weird at all. In fact, if I didn't know, I wouldn't notice. 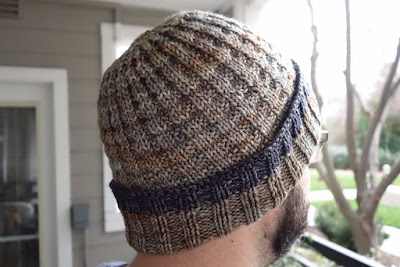 This is a great pattern to keep in mind for a quick gift. I finished the as-written hat in just a few days (though the extra brim had to wait a while because I only took one color with me on vacation). The pattern was knit in Madelinetosh DK with no modifications other than a few extra rows of brim and I didn't use the smaller needle for the ribbing. Court & Spark is the main color and the trim is El Greco, hand picked by Dave at Knit, Purl on our Portland trip. (Ravelry project page) 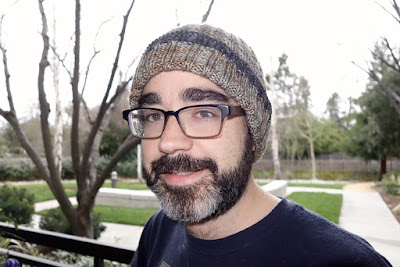 All in all, super happy with the pattern, the project, and the finish. I think maybe I should try some more hats! Alas it isn't that cold here, but maybe everyone in Chicago gets a hat for Christmas next year ;).
Posted by Alia at 12:11 PM