The fingerless gloves in the photos below have been in my Ravelry queue for QUITE a while. I think I've run through about 5 different 'plans' to make them during that time, each with different leftover yarn. Well. This May I finally got my act together and cast on. 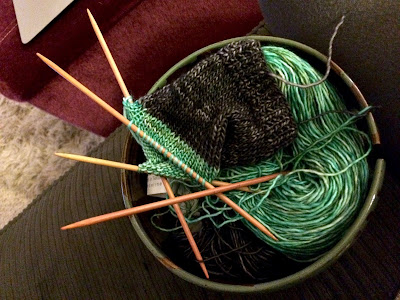 Having finished up one small project from my leftovers, I started this one that same day. I'm pretty sure we were watching Midsomer Murders the day the picture above was taken - easy pattern to follow. The leftovers I chose were from Kelpie, a Pendulum shawl I finished last summer. I still like this combination of Big Sur and El Greco, so I stuck with it. 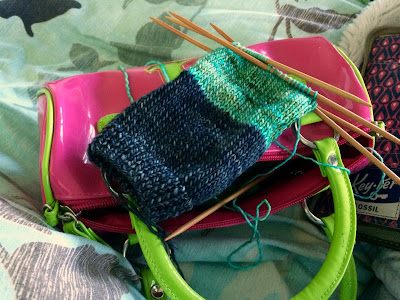 I knew I wouldn't have enough of the gray to get very far, so I weighed the skein and started the wrist and button straps with that color. As I went I weighed very few rows to make sure I was leaving myself enough wiggle room to have about the same length of gray on the second glove. These worked up very quickly, taking only about a week of occasional knitting. I just haven't 'finished' them yet by sewing on the buttons and straps. The whole thing is stockinette in the round - a simple thing that I think showcases the variations in this lovely turquoise very nicely. The hardest part, as always for me, was closing up the hole at the thumb after that was done. Even the ribbing on the tiny needles was ok! 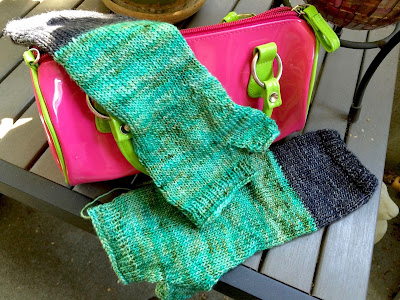 Eventually I'll get those buttons sewn on. The instructions weren't super clear about how or where to sew the straps on, so that's the hold up. I haven't sat down to think about it yet. No rush though, since it won't get 'cold' here for a while yet. It is the height of summer, after all.
Posted by Alia at 4:30 AM