In a frenzy of finishing Labor Day weekend, these mitts made it to the finish line. I wanted to clear some end weaving off my plate before I moved on to my next pair of gift socks, and I decided to include these in the mix. Recall that the knitting itself took only a week or so and then I put them aside because I had to figure out how to attach the straps and find buttons. 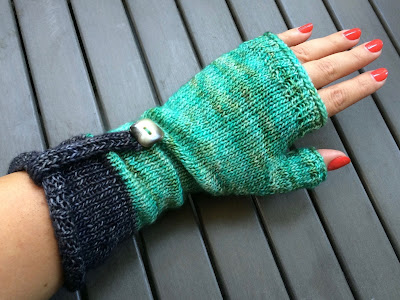 For future reference, here's what I did and I think it ended up working out really well. I used a length of yarn and, holding the strap in place where I wanted to tack it down, started a few stitches to the right as if I were weaving in ends. When I got to the strap I included the edge in my weaving, and then kept on going a few stitches after. This way there isn't a noticeable set of whip stitches or wonkiness showing on the front and I think it should be pretty secure. As to where to position the strap, I just picked a random spot I thought would work and tried to match it as best I could on the second one. 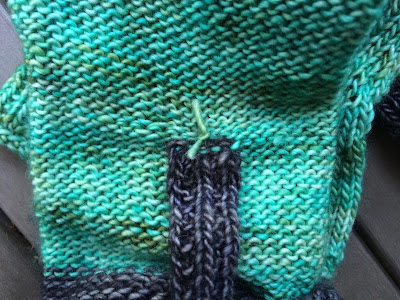 I totally lucked out on these buttons. They were in my miscellaneous grab bag buttons from Britex Fabrics - the purchase that keeps on giving - and they are awesome. I took another length of yarn and stitched these down ending with a simple square knot on the back, the snipped ends of which you can see above. 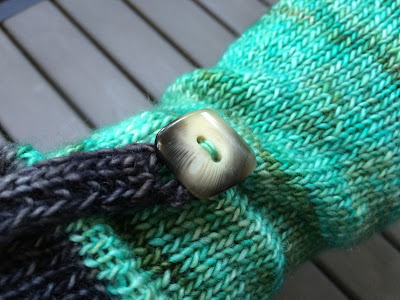 It's getting a little bit chillier here, at least at night in that still so mild Bay Area way, so I'll be sporting these lovelies around town with my Kelpie scarf soon. 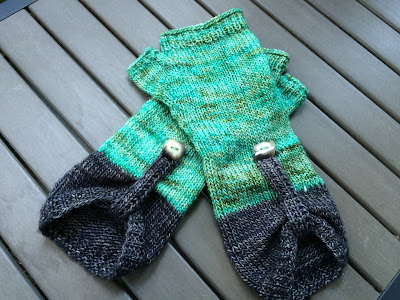 Pattern: Rye (my Ravelry page)
Yarn: madelinetosh Tosh Merino Light in 'Big Sur' and 'El Greco' (leftovers from last year's Kelpie)
Needles: US 2 1/2 and US 4
Posted by Alia at 7:00 AM