I started this scarf last September, bound off in February, and finally blocked it at the beginning of August. Dave will be ready for this football season! Last year when it got chilly at night in Stanford Stadium he wore *gasp* a blue and yellow scarf. Cal colors. The horror. I gave him a hard time about it and he, being quick of mind and wit, suggested that I make him a more appropriately colored accessory. This was hard to argue with, and so a project was born. 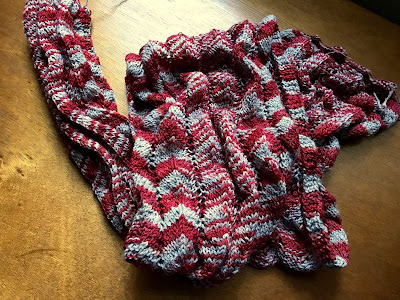 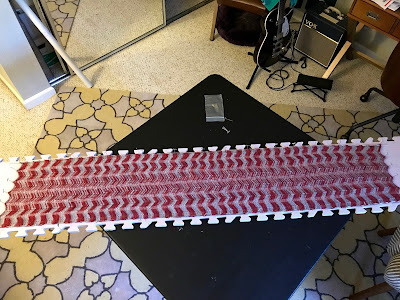 Dave was into chevrons at the time and so he picked this pattern out of a few options I showed him. I was worried it would come out looking a little bit feminine with the lacy yarn over bits, especially with the lightweight yarn, but in the end it's totally fine. The only modification I made was to change the type of decrease at the points to make a symmetrical center decrease rather than the right-leaning one in the pattern.

The striping of the yarn along with the width I picked serendipitously ended up giving me this really interesting pooling where the stripes on the edge are thicker and the ones in the middle are thinner and jumbled up a bit more. I don't think I could have planned that. I suppose I could have fiddled around to see what width would give me pure and regular stripes, but I asked Dave how he felt about it after a few inches when I realized it was going to continue repeating itself and he liked it so I stuck with it. 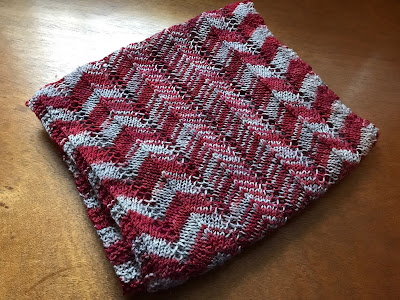 I used just one skein of the two we got, so I will have another chance to play with this yarn. Maybe I'll make him some matching mitts! And a hat for me? Go 'Card.