Well I guess I really was excited to work on that new quilt! I found myself on a quilt-venture from mid morning to mid afternoon today. And it was fun.

Dave is going to visit some friends who are expecting, and he wanted me to make them a baby quilt from us. What a compliment, thanks hubby! After some perusing around on the great world wide web  for "chicken quilt" (chickens are part of an ongoing joke with these friends) I found a quilt I really liked on a blog called Quilty Love (link). The whole thing is chickens! The original and easy to follow tutorial she used for the block was at another blog (here), but I link the first quilt as well because it was the bright colors and fresh setting that really caught my eye and inspired me to make it. 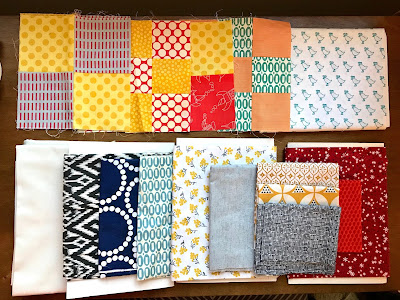 We pulled fabrics together a couple of days ago and in the process of moving my supplies from closet to cabinet we also found some leftover blocks from an old project that seemed like the perfect fit. We're going for primary-ish colors. Dave really liked that bird print at the top right for the backing, so I pulled in one print with similar colors for the front and that also made that orange and turquoise nine patch fit in better, so it got added in too. 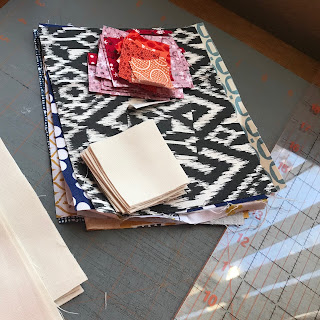 The cutting didn't take very long, which was good because it's my least favorite part, nor did it really take up that much fabric. With the largest piece for each block being 5.5" x 6.5", this is a great project for leftover odds and ends. I have no idea what the exact color name for the background I chose is, but I'm sure it's a Kona solid and it is off white. I happened to have a bunch of it on hand; thanks, past self!

The blocks came together surprisingly quickly, and before I knew it I had a flock of chickens on my hands. I really liked the simple construction - just a few seams and a nice big piece to show off fun prints. Also, the design is just so cute. I feel like each chicken has its own attitude. Being able to freehand cut the combs is part of it, but also the way they are standing they're just proud little chickens. So fun. 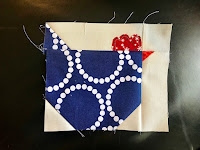 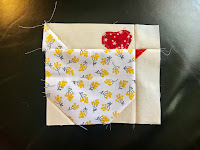 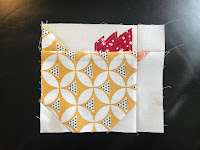 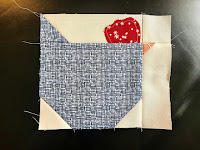 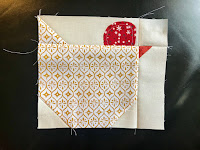 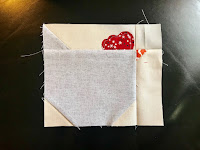 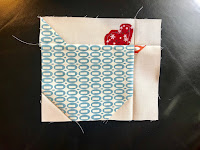 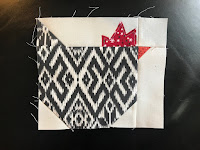 I hemmed and hawed over the quilt layout for a while. I wasn't certain how big I wanted it to be. In the end I figured eight chickens plus the four other blocks was enough if I used wider than usual sashing. This decision was helped along by just throwing the blocks on the floor and moving them around until I was happy. I thought to myself "hmm how big are those gaps? maybe i'll just make my sashing that wide." They were about 3" and the overall size with all the blocks spread out seemed big enough so I went with that. Then the next question was to square or not to square? The orphan blocks are 8" squares, but the chickens are 7x8". I thought about adding a strip of background on the bottom of each chicken to square them up but then decided it would be less annoying to trim the patch blocks down to 7x8". 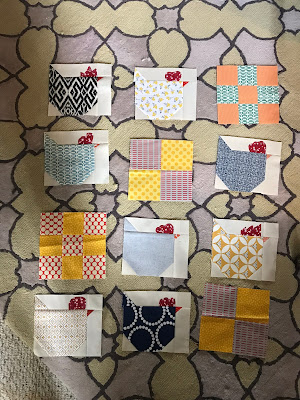 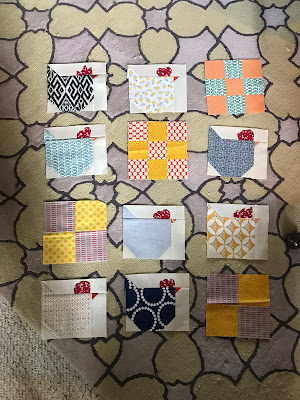 I deliberately chose to make the longest piece of sashing the horizontal ones and to piece the vertical ones in order to emphasize the slight rectangle-ness of the blocks. I also set the directional fabrics in the patch blocks to be stretched horizontally as well. I really love the way it turned out! The squat little chickens and their patchwork friends look very hip and modern despite the traditional setting. I liked the way the inspiration quilt looked being completely chickens, but I really think those orphan blocks found a great home in this quilt and give it that extra bit of quirk that I love. 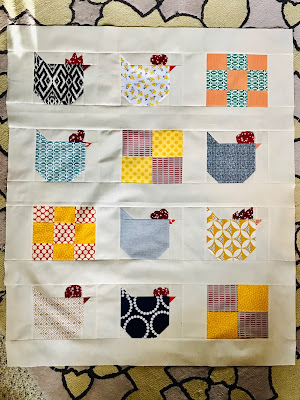