Yesterday I took a trip over to Michael's to get some aida cloth for an idea that popped into my head. I've really been enjoying cross stitching lately, and I've been spending way too much time on Pinterest looking at witty sayings in embroidery hoops. Combine those facts with a friend's birthday this weekend and you have this quick little project.

DMC has a lot of free embroidery and cross stitch patterns on their website. I've spent the spring downloading flower and succulent patterns, which made me wonder if they wouldn't have a unicorn simple enough to make in a couple of days. 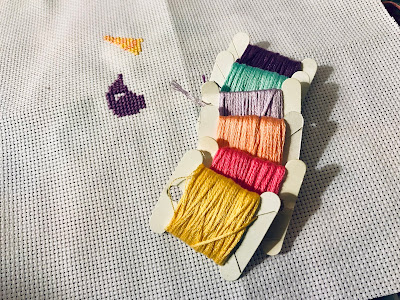 Ta da! I didn't follow the colors in the pattern, though I'm pretty close. I have a pretty large thread stash that doesn't need to get bigger right now, and many of these colors fell under the "close enough" category. I also modified the horn, which was supposed to be a rainbow, to be a swirl of yellow and peach, which I like better. The original pattern also has some starbursts and hearts in the background but all I really wanted was the unicorn head. So there we have it. 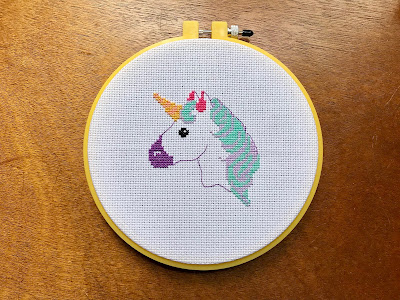 I finished the last stitching and final touches this morning and it is so very cute. I would totally keep it for myself, but it's perfect for the birthday girl. The hoop is a bright yellow plastic one I also got at Michael's. I finished off the back by tidying up the aida cloth with a trim and cinching it closed with a running stitch using white thread. I considered but ultimately abandoned a felt backing because this particular hoop design makes it difficult to stitch on and I did not want to use hot glue on the plastic. 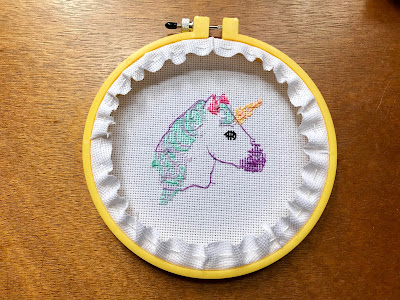 I envision peppering my walls with little hooped vignettes now... it's probably a good thing that I have a lot of other projects going or else that might actually happen! Hopefully at least a few more will make their way out of my imagination and into real form because this was a really fun and really quick project.

Now back to the last rows on that mosaic baby blanket....
Posted by Alia at 12:59 PM