I really got on a roll last week with the Halloween decor. We have plenty of festive decor already but I LOVE fall, so what’s the harm in a few more pillow covers? In the same vein as the piece I already completed, I took some more inspiration from quilting magazines for many of these blocks. It was really fun to try out some new to me blocks. I especially enjoyed making the pinwheel in the bottom row. 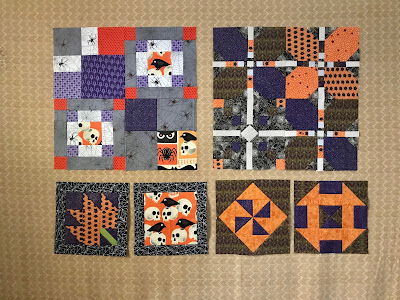 Four of these blocks were intended to make just one more large pillow cover: the leaf, the pinwheel, the churn dash, and one of the blocks with the orange corner stones that is in the large gray four patch. I wanted it to be scrappy looking but when I put all of them together it just didn’t look right. So I pulled out the two “less Halloween” looking patches and made another couple of blocks - the two with the crow and skull fabrics. Turned out the gray spider ones didn’t look as good with the black bordered ones, so I played around with just some big scraps and the rest of my gray spider fabric to end up with the improvised blocks in the big gray four patch. It was fun! And look how these things multiply! I’ve decided to make the pinwheel and churn dash into covers for smaller pillows I’ve got lying around - they’ll be good throughout fall I think and not just Halloween. 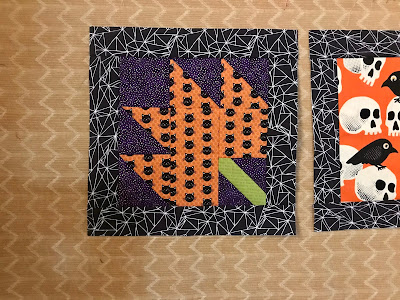 I’m not sure what I’m going to do with the other two blocks. I thought about pillows, but I might just keep them around to think on a bit longer. The black frame was a nice way to showcase that big crow and skull print, but I just love this leaf block. Originally I was going to use the purple background as the leaf but I’m glad I changed my mind and used the cats instead. So cute.
Posted by Alia at 5:58 PM