This was kind of a fun and simple blanket to make. I found several similar types, mostly with sherpa fleece backs, on Pinterest and I was struck by the simplicity of having just one piece of fabric lined with fleece rather than piecing something together. It’s a good way to find a home for some of these gorgeous large scale prints we all covet from time to time. 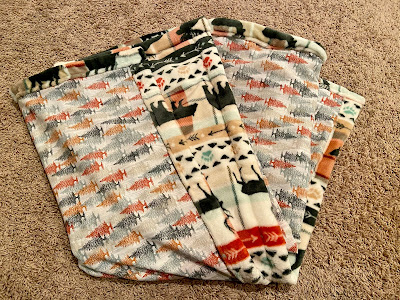 What got me started on this was finding the fleece in the remnants bin at Joann’s. It was pretty cute, too cute to pass up one might say, and just about the right size to make something lap-sized. The tree fabric was something I’d seen in the fall and liked but put back because I literally had no inkling of plans for using it. But when it’s 60% off and it matches a fleece remnant you don’t need but must have? You must buy. I think maybe this would look more impressive with a larger scale print but it’s still a nice woodsy hipster cabin blanket. 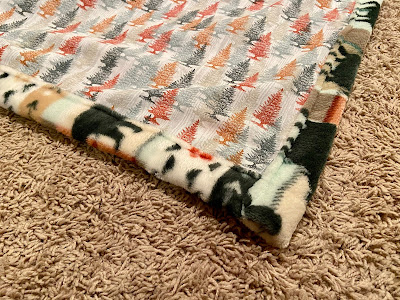 All I had to do was trim selvages before stacking the two together and folding up the edges of the fleece to pin. I pinned and sewed the two short edges first and then went back and did the same for the longer edges. All the sewing needed was a topstitch type of seam on the inner folded edge of the fleece on all four edges and voila! 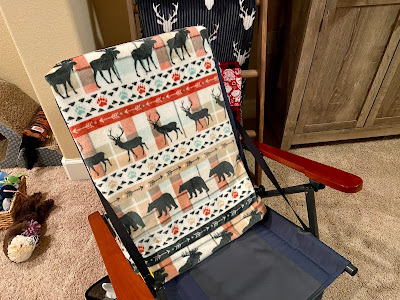 It turned out looking good and Dave has claimed it for his pajama room (aka loft) time already. My general thoughts? It’s a little strange to my hands having one side be fluffy fleece and the other a relatively thin cotton. If I were to do this again I would think a linen or linen-like fabric would be a good option or something heavy like a tweed. Another option is to not fold the fleece over the way I did and instead try to have the quilting cotton go all the way to the edge? At any rate, worth a try again with some modification. It was fun and the blanket looks great.
Posted by Alia at 10:51 PM