omg it’s under the tree

Approximately one million nine hundred and seventy two stitches later, it’s done! Last time I left this, it was August and I had plenty of time until we put the trees up. Ha! The stack of hexies definitely hung around in my “to do” basket until at least early December. 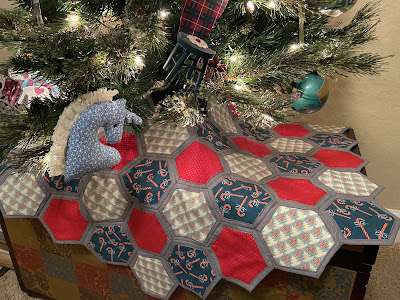 The issue I was having was this: I was feeling much too lazy to hand stitch them all together, but I didn’t think that zigzagging along all the seams would look very good, even if I used gray thread. Soooo. They sat. And sat. And sat some more. I think the fact that we actually had the trees up and last year’s (perfectly fine) tree skirt was under the little tree upstairs was what got me going. So the next many evenings and afternoons were spent whip stitching these all together. I finished one afternoon when Mom and I were in the studio and she snapped this picture. 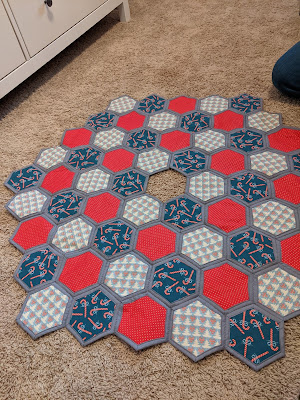 As I went along, I had to refer to a photo of the whole thing put together because I decided to go with the completely mixed up version, and that’s much harder to remember what goes where. I used hand quilting thread and a quilting between to stitch and used a simple whip stitch, just as if I were doing English paper piecing. The cream thread is visible on the back, but not on the front and that’s where it matters most. I’m pretty happy with how it turned out. To be honest, when I finished it (under the wire) I thought it looked too small and was pretty bummed. But it’s a perfect fit under our little tree that we put on the blanket chest. And it’s kitten approved! It took him a few days to want to sit on it though, I think all the prints kind of blew his mind. 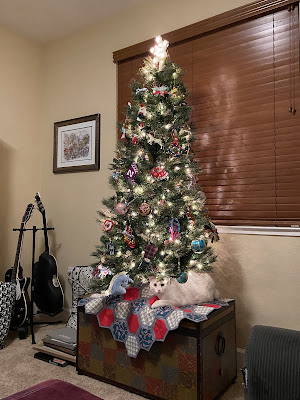