January is finishing up and so am I. This fun project came as a special request from my brother for my nephew. I had a lot of fun playing with fabrics on this one.... so much character, literal and figurative. 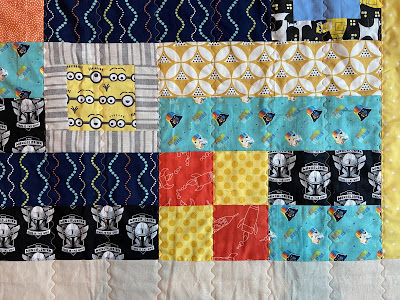 The challenge was “hey can you make like a hanging thing I can put around my desk so the little guy has a hidden room down there?” Like a quilt fort? Yes, yes I can. Basically I made a short, wide quilt that is long enough to wrap around the dimensions of the desk he had in mind and a couple inches shy of the height from desktop to floor. I sent some sticky Velcro tape along with it so he could customize where the anchors were based on the obstacles/potential anchor spots on the desk architecture. 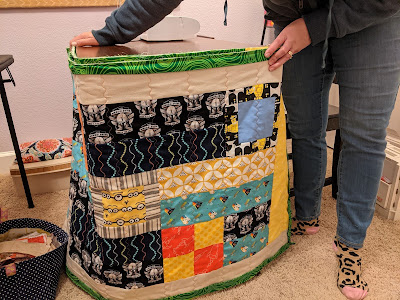 Serendipitously, I had a couple of Star Wars prints sitting in the cabinet: one colorful print that I just looove and one black and white Mandalorian print that Mom recently found. Hurrah for the remnants bin at Joann’s! I pulled a bunch of fabrics from my scrap pile that I thought coordinated well with the retro rainbow and hemmed and hawed until I had a good combination. Of course leftover Minions had to make it in there, and I even got to use an orphan block from a really cool quilt I made a long time ago for a wedding present (that red and yellow patchwork). 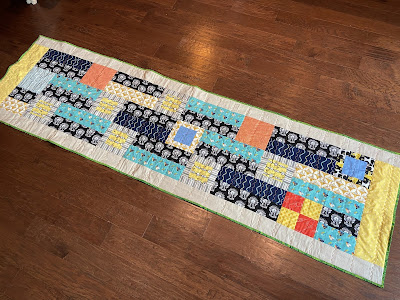 For the pattern I decided I really wanted to pull something from one of the many quilting books and magazines I have on my shelves. Not that I’ll stick with this intent, but I’m hoping to work out of my hard copy books and patterns more this year both for sewing as well as knitting. We’ll see how it goes. The pattern I chose was out of Fat Quarterly Shape Workshop for Quilters. I modified it a bit to serve the dimensions I needed and the fabric on hand, and I changed up a couple of the squares to be solids as opposed to square-in-a-square, but the inspiration was definitely from the book. I added (what else?) linen to the top and bottom to make up the height I needed as well as to serve as a bit of a visual frame and a fun yellow polka dot print to the ends to make it long enough. 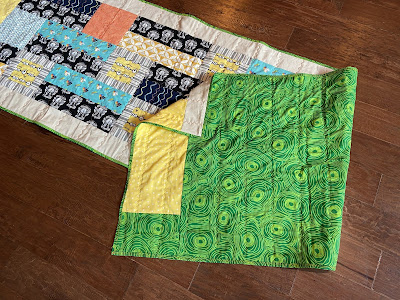 I thought for a hot second about making a second pieced panel for the back and then thought better of it. I have FINALLY used up all but a small rectangle or two of this green swirly print. It started out life as a duvet cover from Ikea and has been extremely useful in many projects since it was retired to my fabric stash. Don’t get rid of your old duvets, people. You obviously loved the print/design/colors when you bought it and there’s so much fabric there! As long as they are still in decent, non pilled, non gross state of course. 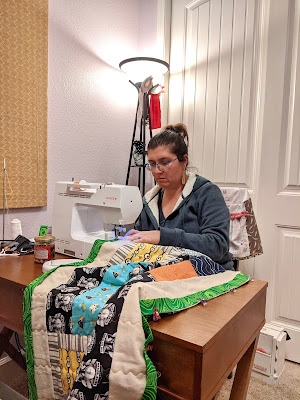 Quilting and binding went along uneventfully, especially since I got those little clips to hold on the binding as I sew (which you can see in the picture above). I swear I don’t hate binding as much as my face suggests. For the quilting I echoed one of the prints in the quilt, a navy with waves of dots, and did the preprogrammed wave pattern from my machine. The front got orange to pop on that retro Star Wars print and the back got yellow. Look at the Darth Vader and Storm Trooper heads. Isn’t that awesome? I know. 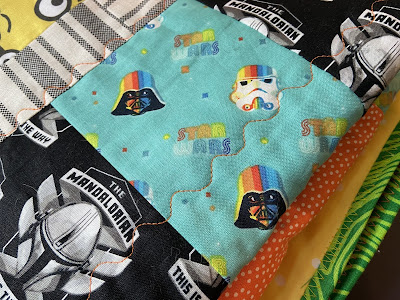 I’m really happy that my brother thought to ask me to make this. It’s always fun to make for other people but it was especially fun to make something that was actually requested! 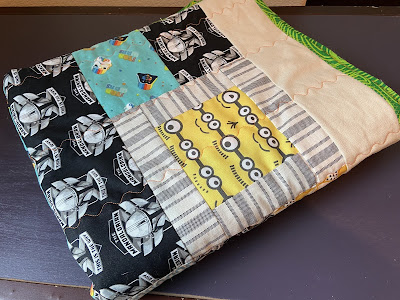