Here’s a fun thing I finished and promptly forgot to write about. I haven’t taken it to the barn yet, but I did get some photos of it in the garage when I brought my saddle home for conditioning back in January. February this year was so silly that here we are in March already. 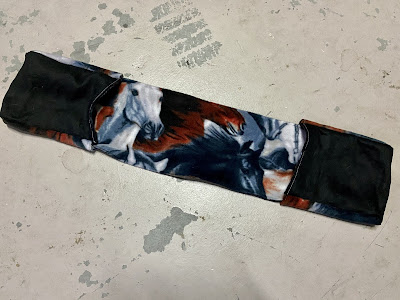 It’s another mostly unnecessary horse accessory, this time for my saddle instead of the horse. I say mostly because the new stirrups I bought are quite heavier and larger than my previous pair and this stirrup cover should definitely keep them from scuffing up the sides of my saddle. Necessary? No, given that my saddle lives stationary on it’s own rack at the barn. Nice to have? Totally, because it does occasionally get transported to and fro in the car, and I suppose carrying it from rack to horse? Anyhow, it’s fun. 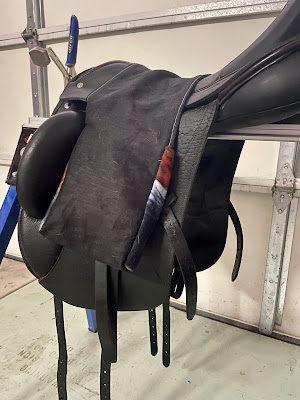 It was an interesting thing to try to make off the cuff. I’d been seeing some online marketed by intrepid college students who make custom fully fleece ones. How hard can it be, says I. The fleece, one figures, is great against the saddle for softness and anti-scuff properties. I was skeptical about it as an outer layer though because barn dust, which is everywhere. I tried mine out with a black linen outer layer that I think should at least be wipe off-able in comparison to the fleece. I’m aware it will still get dirty, but at least it will be under my saddle cover most of the time so it won’t be getting the full barn dust treatment. Though, it is already full of cat hair thanks to Newton’s aerosolized fluff so maybe that’s a miscalculation. The black did seem a little less “loud” than making the whole thing out of the print though. Don’t want to attract any attention! 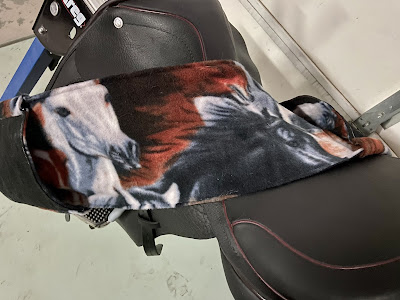 I used a horse print fleece print from the stash cabinet on the inside and also ended up adding it as a gusset for the stirrup pockets. Originally I thought I’d measured long and wide enough to be able to just sew a rectangle of linen to a rectangle of fleece, fold up the ends, sew them down to make pockets, and call it a day. Not to be. I mis-measured, even with the buffer I thought I was adding, and the stirrups wouldn’t fit. So I just took four rectangles of fleece and sewed them on in such a way that they form the sides of the stirrup pockets and problem solved. 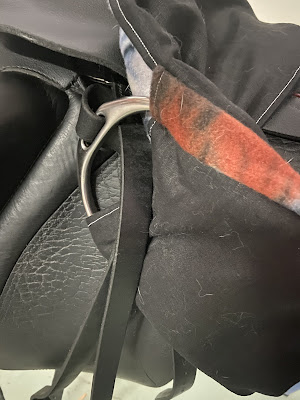 I think in retrospect I forgot to account for seam allowances, not too sure what happened. That’s what you get for designing on the fly. (Pretty sure it was also super late at night when I was sewing). I do still think that with proper measurements the first, much simpler and faster, way should be possible. I avoided taking it to the barn this muddy season; no reason to tempt fate. When I eventually get around to using it I think I’m going to smile whenever I see the ponies on the inside. 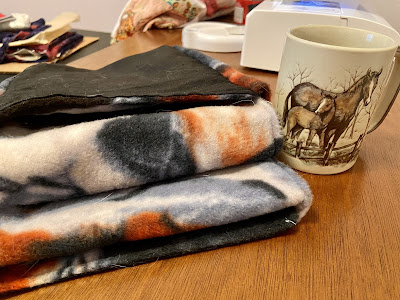