Ever since seeing this quilt made by the circles of do.Good.Stitches. for Rachel at Stitched in Color, I've wanted to try this quilt block. Apparently it is called the Japanese x-and-+ block, and I found a great tutorial for one (12.5" x 12.5") here. Eventually I'd like to make a whole quilt using this block, but for now I've got another project in mind. Shhh! It's a secret (for now). 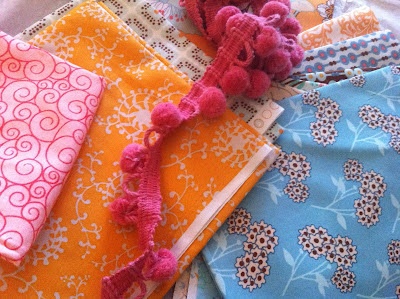 I've cut into my Summerlove! These fabrics are lovely, soft, and the colors remind me of the Boardwalk down in Santa Cruz. Beachy indeed. I had this fun pom pom trim that I think will look cute with the (eventual) finished project and brings out the little bit of pink in these fabrics to balance out the blues and oranges. 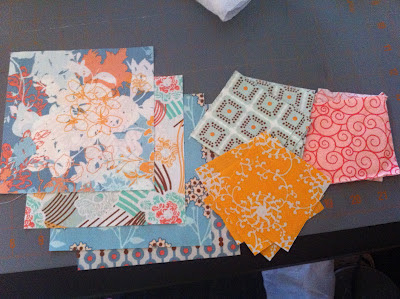 This was very quick to cut out, everything starts from squares! After making it, this makes sense but I wasn't expecting the piecing to be so straightforward. Ah, geometrical magic. Here are my squares all cut out and playing nicely together on the card table. 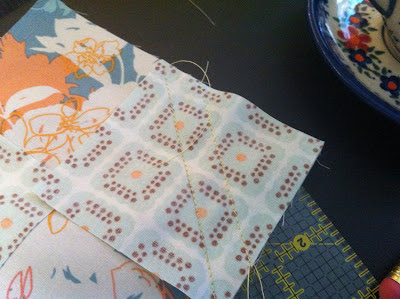 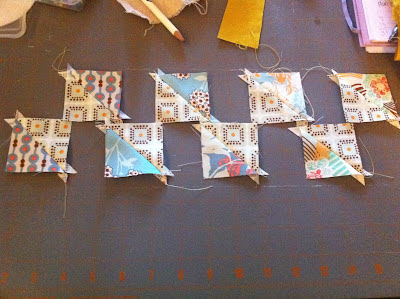 To make the x sections, small squares are sewn onto big ones then extra fabric is cut away, effectively replacing the corner of the large square. This is accomplished by sewing from point to point on the smaller squares. After considering the extra fabric I was cutting off before cutting (what a concept!), I added a step: by sewing another line 1/2" away (perhaps visible in the top picture above) and cutting halfway between, I easily made my extra fabric pieces into half square triangles. Why not, right?? I've squared those up and am saving them for later. 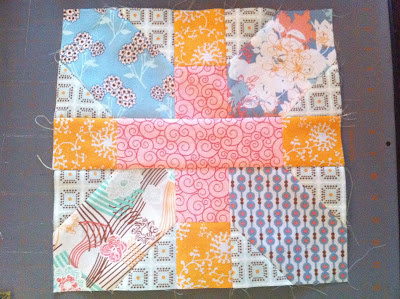 The piecing went very fast, and I am quite pleased with the resulting block. I took a cue from the tutorial and decided to make the four x sections from four different fabrics, giving it a scrappy look. Here it is finished on the card table. Below is a picture with the afternoon sun shining through. :) 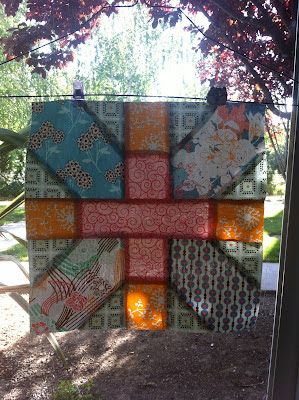 Linking up to Sew Modern Monday and Manic Monday