The industrial revolution brought many great inventions to automate tasks otherwise done by hand, but none more enchanting and useful than the sewing machine. Ok I might be exaggerating a bit, but I love my Singer.

The past couple weeks I have been working on the next round of my handstitched class quilt which includes a round of patchwork anchored at the corners by Storm at Sea blocks. The technique of the week is english paper piecing. I had my first taste of EPP earlier this year in the form of a single star blossom block I made just to see what it was like. I enjoyed it, and was happy to get a chance to revisit the technique as part of this quilt. 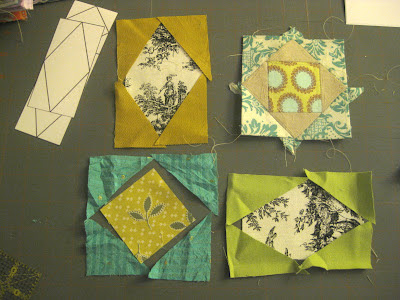 This time around, it proved a little bit more challenging for me, partly because there are smaller pieces, but mostly because of the extreme acute angles on the small pieces. The toughest part I think are those eight green triangles surrounding the diamonds. I had a hard time being happy with the way my seam allowances were laying/being stretched as I basted. This may have had something to do with my fabric choices -- they aren't all quilting cottons. 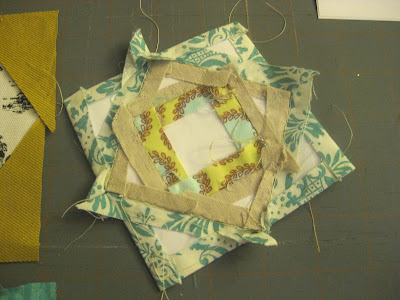 I managed this first part of the block just fine, enjoyed it even. The next three parts were not quite as enjoyable, but I finished it. I did realize however that in order to finish the other three blocks and the rest of this part of the quilt in the time I had available before the next set of lessons I was going to have to pick up the pace. My sewing time these few weeks hasn't been that abundant, so I decided to teach myself how to foundation paper piece.

Foundation paper piecing uses a machine rather than hand sewing, and rather than wrapping fabric around the individual paper pieces, fabric is sewn directly to the larger intact pattern. I ended up using this tutorial to get the general idea of how it all works, then just diving in! Thankfully these are actually pretty simple blocks to piece this way; not even a y-seam in sight. There are a few geometrical acrobatics that gave me problems when trying to do those long triangles on the diamonds, but I just made friends with my seam ripper and persevered until I figured it out. 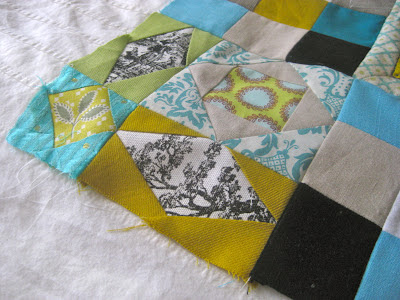 I will still enjoy EPP when I have larger pieces to work with, but for anything with small bits or small angles, I think we'll go one letter farther down the alphabet and use FPP.
Posted by Alia at 8:30 AM