Skirt on a whim

When we went to Portland at the end of May, I scored some awesome fabric. One of those finds was the print that turned into this skirt that I promised myself to make because I wanted an excuse to buy some. This is one promise-to-self that I've kept; super proud. 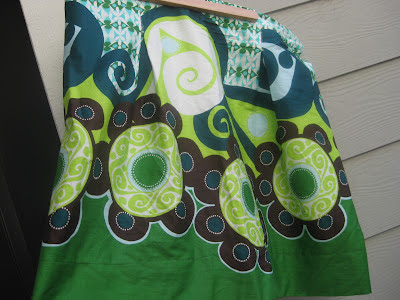 The bolt was in a section of random 72" wide cottons and, considering the colors, had my name written all over it. Half of it was this pretty tribal border print, and the other half was just the smaller print continued to the other selvage. I literally took it off the shelf and started wrapping it around my waist trying to figure out how much I needed for a knee-length skirt. Dave laughed, and so did I. 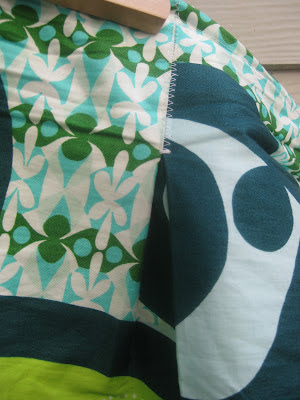 All I did for this skirt was sew the length into a tube, put in some pleats and a small waist band, and add a zipper at the seam. It sat for a few days while I considered how best to hem it until the day came when I wanted to wear it. Then I tossed all thoughts of being careful aside and hemmed it by folding up the selvage edge about 3 inches for a wide band on the inside to finish. I was worried about how it would hang after hemming, but it's just fine, no extra stiffness in the hem. I think this is because it's so wide.

This all sounds very 'simple' until I explain that I had to try it on many times to figure out where to put the pleats and how far down to sew them closed. Also, by pure serendipity, the pleats in the back are not zigzagged as the front ones are (shown above) to help with fit, but this also happens to make the skirt roomy enough back there (ahem) so it hangs evenly front and back when I wear it. In the end I wish I had written down what I did as I went along, but it was one of those things where I was winging it and made and corrected so many mistakes that I probably couldn't repeat it if I tried. Ah well, a one of a kind, then. 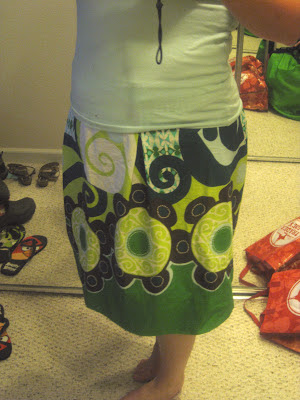 And it fits! (Kind of an odd angle, but it's just below the knee.) This was my first actual clothing finish for myself that has ended up fitting and I've worn. And I love it. The bonus? I didn't need the whole width of the fabric, so I have a nice amount of the cute little print left to play with. Aren't those colors great????
Posted by Alia at 8:30 AM