A Bicycle Built for Two

And now for something completely different... yarn. I started this scarf back in January when most of the work I was doing involved two needles or a hook. Somewhere along the way I transitioned into sewing more than I was yarn-ing. I have been very good and have not let myself start any new knitting or crocheting projects until I finished all my WIPs! That didn't mean, however, that I couldn't start sewing instead ;o) I think a lot of that had to do with this scarf. 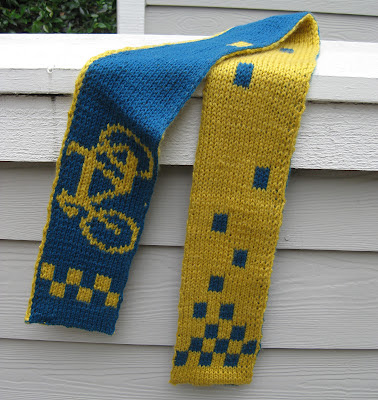 I really wanted to teach myself to double knit with a nice easy project, like a scarf. The problem is, double knitting is kind of like doing 1x1 rib. I hate 1x1 rib, I'm really slow at it. With the more complex pattern, I was distracted by the pattern and it didn't really feel slow. Once I got to those long plain straightaways though, roadblock. 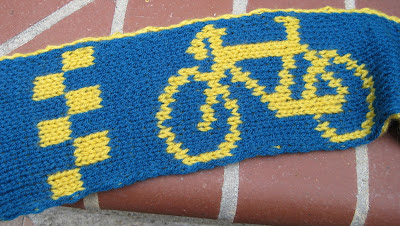 At any rate, it is a double knit scarf with a neat bike design at one end I adapted from a pattern I found on Ravelry (Tom's doubleknit bicycle hat). I thought about doing two bikes, but instead decided to go for a "reappearing checkerboard" type of thing at the other end to match the first rows. I made that up as I went along and think it turned out rather nicely! It kind of makes me think that the bike had some paint on the tires at some point and got those little dashes scattered across the scarf; Dave thinks it will make him look super fast. 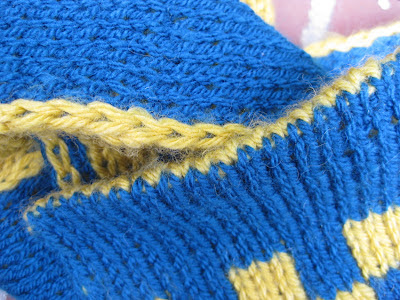 Finishing up the last rows was a triumph, and I was happy to get to search around on youtube for a kitchener stitch tutorial so I could seamlessly finish up the edge to match the cast on and sides. Last night I blocked it using my trusty steamer, and voila! Nice and soft. And done! 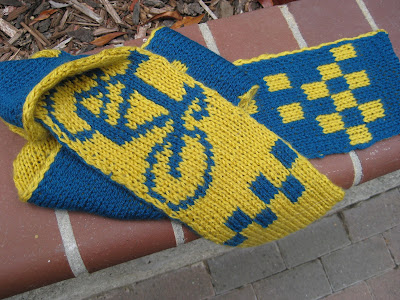 What is really special about this scarf is that half of it is yarn I bought on a day trip to Delft while we were living in Amsterdam (details on my Ravelry page). It's not quite true "Delft blue" but it is for our purposes here. The bike is also a memory from Amsterdam, and Dave will be sporting this while riding his bike to and from Stanford (when it gets cold enough!).

Hooray for perservering, because Dr. Dave loves it. Y'know, like Napoleon would. 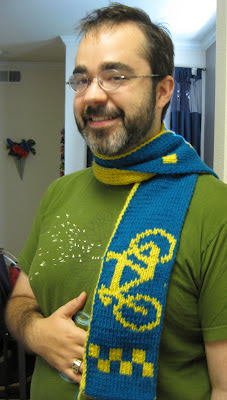