Ripples in the Pacific

I bought some yarn from Nine Rubies in San Mateo a month and a half or so ago, and to justify the cost at the time (i.e. headed into the holidays) I had to promise Dave that I would use at least some of it for myself. What a sweetheart. He knows we crafters hardly ever keep anything for ourselves and has been a big encouragement to me in making for our home. But home vs. self is different, and an even higher hurdle to get over.

After working on a lot of sewing projects at the card table through October, I was in the mood for simple knitting. Not even stockinette (purling somehow is not as fun...) but garter stitch. Oh yes. Simple. So I popped onto Ravelry looking for some garter stitch shawls that still had some visual interest. I found the Multnomah pattern and really liked the simplicity of the design which still has so much to say.

I loved the way her finished product ended up with just a single color that had highlights and lowlights along the skein in a beautiful green. When I saw this pretty turquoise color, felt how squishy the yarn was, and read the colorway name (Asilomar) I knew this would be the perfect memento of my time spent here in California. Thus, Pacific was born. 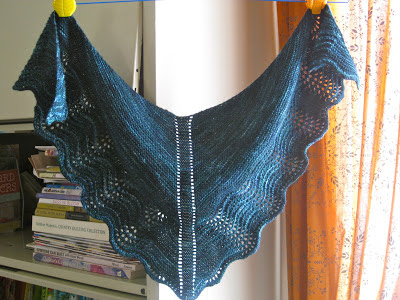 One of my favorite things to do when I first moved out here eight years ago was to drive 92 out to Half Moon Bay to see the ocean. I did this with friends from grad school, friends from home, by myself, and at one point even took horseback riding lessons in an arena by the waves. The Pacific fascinates me and I could stare at it for hours (as I demonstrated on my birthday last year when Dave took me up to Mendocino County for a weekend). The edging is a subtle reminder of waves lapping up on the shore. 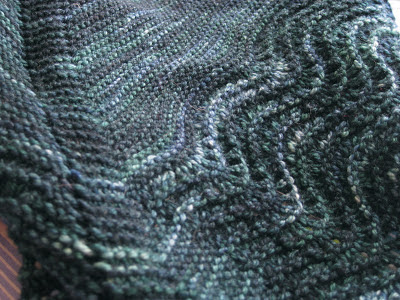 The yarn, Shalimar Breathless, knit up beautifully and was a pleasure to work with. I would definitely use it again in another project. It seems like it will hold up to wear quite well, too, but still manages to have a drape to the fabric. This was a good project for travel since the pattern is pretty simple. I actually finished the last few rows of it in the late evenings in Boston last month. Blocking took longer, but I got that done this weekend. 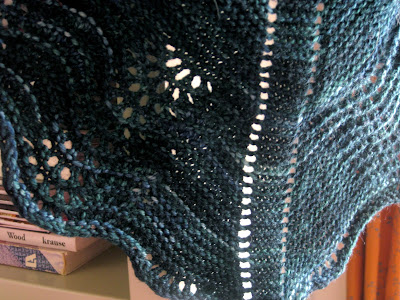 I also got to break in my new interchangeable needles that I got for my birthday! It's so nice to have all the sizes handy so I don't have to worry if I have the right one when I see a project I like. I can't say how many times I've gotten excited to try something one evening and then realized I didn't have the right the needle size. Problem solved! Super excited about that. 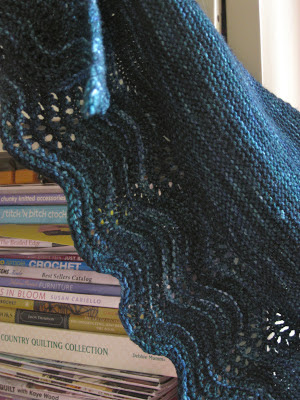 I've already worn it and despite the fact that it's a weird in-between size (not big enough to wrap around, but too triangle-y to tie as a neckerchief) I found a good way to tie it and not have it look like a bandana. As it turns out, it will look very nice with my abalone shell pendant. How appropriate.
Posted by Alia at 8:30 AM