Well that was fun. I started and finished my bee blocks (for November!) last night. They've still got a few days to fet there on time. It has been the first bit of sewing more complicated than a few fabric tubes that I've done in about a month. This fall has been completely full of travel so I've been doing knitting on the planes. Also I started and finished Anna Karenina. That's what a few trips to the east coast gets you from here -- loooots of reading time. 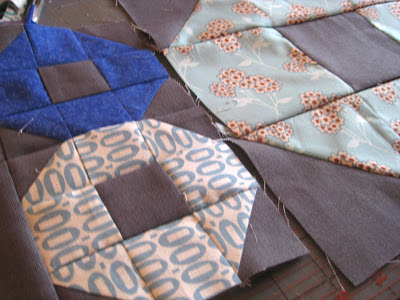 Jacey asked for shoo fly blocks in a variety of sizes/layouts using blues with grays in the background.  I have to admit, the free formishness of the prompt was probably what stalled me when I first read it, but the bigger issue really is that I don't have any gray solid. I kept thinking I would have the time to go get some (hah!) but in the end I just made do with cutting solid sections out of a print I had leftover from the back of Steve and Egle's quilt. It's a little heavier than quilting weight cotton, but not that different in texture and weight than linen so I think it's all right. I actually really dig the color. 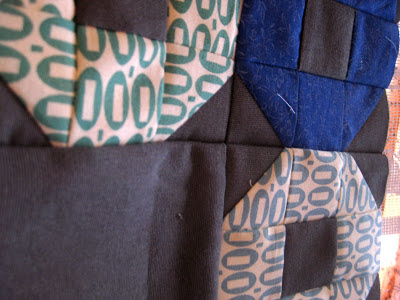 Also it turns out that the freedom from a final finished block size worked in my favor since I could improv piece a few smaller shoo flys based on what squares I could get out of some smaller scraps of the gray I had. I didn't need to worry about what size they'd end up, just that I could join them up and make them into a larger block. Woo! I felt so resourceful. 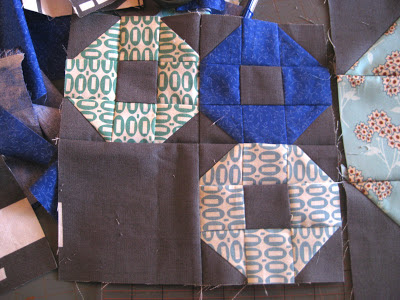 Then I really wanted to use that Summerlove print from my stash, but to get the blue to dominate the pieces it really needed to be a single large block. So after doing the little fiddly bits in the first block I  got to go nice and big for the next. Boy that one went fast. 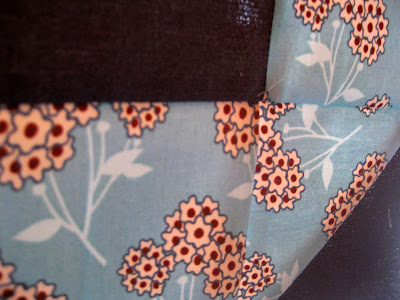 So, what I originally thought was going to be a hard assignment actually turned out great. The blocks were way easier to piece than I thought from skimming the tutorial the first time around, and I'm all in all pleased with my color choices and the final products. And it felt so nice to sew again! 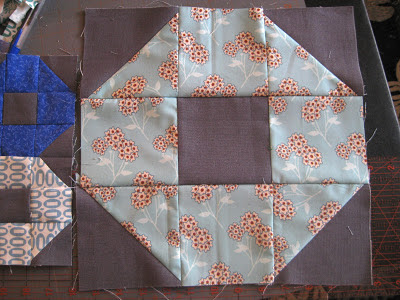