Funny thing about these next two posts... I was intending to put my sewing machine away and clean up the craft room. Before that could happen I decided I should probably get my bee blocks for the month finished. Isn't that always the way -- just one more thing! Our mission this month features flying geese in pinks, aquas, navys, and a low volume background. I've never made flying geese before, so I got to learn a new skill. 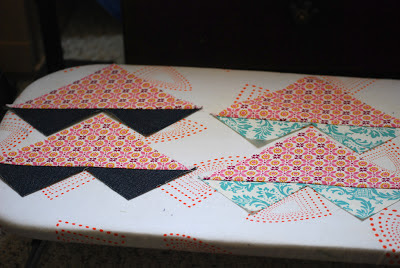 I didn't really start out with any sort of plan, just pulled some fabrics and started making units to test out some different methods. I like the four-at-a-time method the best, and while making them they sort of looked like little alien ships all lined up on my ironing board. The benefit of this method is that there is zero waste. I used a 6" square for the center and 3.25" squares for the side triangles.

I found that sometimes I just wanted to make a couple in different color combinations so I used a more standard approach, too. There I used a 5.25" x 3" rectangle and 3" squares. The geese end up being ever so slightly smaller than with the first method's measurements, but the difference could be made up in the seams and really is quite tiny. If you stitch one extra line, this method also gives you small leftover half-square triangle units (instead of tiny, annoying triangle scraps). So while it's technically "waste", they are useful assembled little pieces for other things. 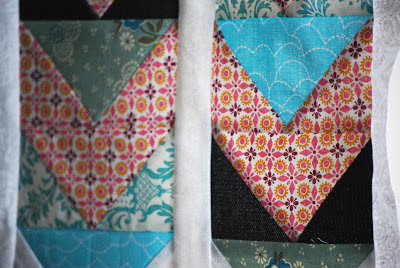 Turns out, if you plan your colors accordingly, flying geese units can be combined to form little chevron shapes. I took these shapes, alternated pink and blue chevrons and fashioned them into feathers. I originally intended them to be oriented in the other direction but the more I looked at them it started to make more sense to have the v's pointing down instead of up. Much more like a feather. 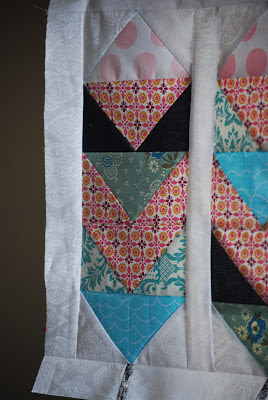 I pieced the strips of geese first then added some sashing using 1.5" strips. The top and sides got plain strips and in the bottom I embedded some tiny black and white pieces to act as the feather shaft. I was pretty pleased when I snapped this picture of the finished product considering I had improvised the whole thing. It ends up being a 13" x 14.5" block. I'm so proud of this one so I've named it - Goose Feathers. Appropriate, no? After I finished I reread the post from Ara Jane and realized the backgrounds of the geese (i.e. the small triangles on either side of the larger one) were supposed to be low volume, not just the block background. A quick email to double check was sent, and turns out this is just fine. I was willing to keep it and build off of it to make a small quilt (and once I thought about it kind of hoped to *wink*), but I'm so glad it will be ok to include in the bee quilt!
Posted by Alia at 7:00 AM