I always like to take a knitting project with me on trips so I have something to do on the plane. This means that I'm often starting something new the night before so I have a portable and easy one (e.g. socks). This, however, really takes the cake - why not start and finish something the day before so you have the perfect accessory to wear on the trip??

That's a little bit of an exaggeration, but not by much. The knitted cowl was in fact already done - it was Lando, which I finished and wrote about in January 2015 - but the thought of lining it has been marinating in the back of my mind for a while. I've never actually gotten around to doing it until I decided that this HAD to be the cowl I took with me to Scotland. Temperatures in the highlands were forecasted to be a little bit chilly; apparently warm for them, but high 50s and low 60s is cold for a California girl. Also that seems like the perfect excuse to wear a warm yarny thing. The issue I had was that I wanted a cowl that was small and would go with everything I was taking with me. Solid navy Lando was perfect but I haven't really liked wearing it because the wool is a little bit itchy. 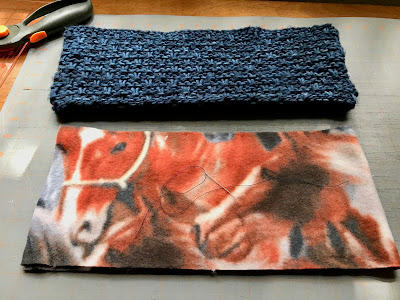 I've had the fleece for it in my stash and earmarked for the lining for just as long as the cowl has been around. This horse pattern seems appropriate given that I named it after a horse I was riding the winter I made it. With really no other excuse other than just "it seems hard to do" I sat myself down to figure it out. In the end I just attached it the same way I would a binding to a quilt, with a ladder-like approach to the whip stitch. I used a sturdier thread rather than just plain sewing machine thread and I think it worked out just fine. 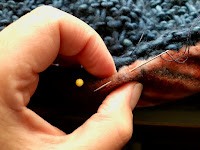 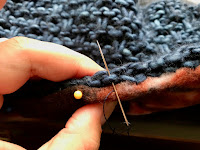 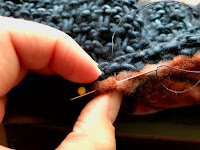 All I had to do was cut the fleece a little larger than I wanted, sew one seam, and then whip stitch on while folding the edge under. The cowl is narrower than the horse pattern repeat, but I lined it up so I had at least a few faces peeking in when I cut the piece out. 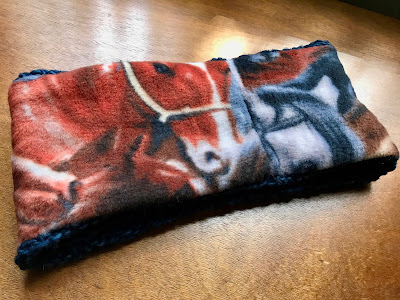 The funny thing is that after all was said and done, I actually got the fleece in upside down relative to the way I like to wear the cowl. Oops! Well, only I will know. 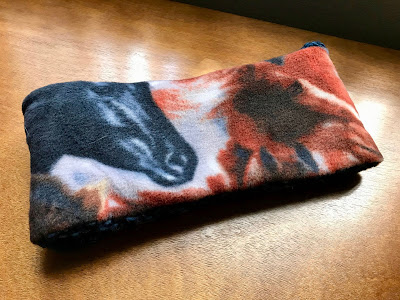 And the most important part, it was great to wear! With just a small amount of effort, it has become one of my favorites now. Thumbs up for sticking with it. 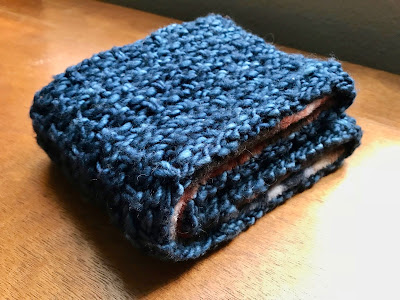