One of my friends from the barn had a birthday last month. Her boss, another good friend of mine, suggested I make her a knitted scarf she can use to ride in since she loves the one I made her so much (what great feedback to hear!). That was a fantastic suggestion, so I got started on it and it took me just a couple of evenings of knitting to finish. 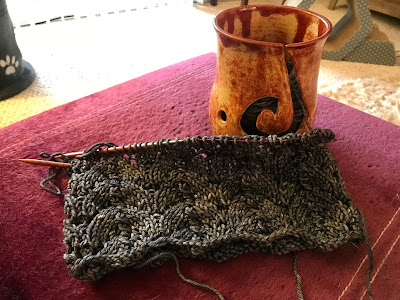 I tend to wear very bright colors at the barn - I have riding pants in red and purple - and Celeste laughs at me since she wears the more traditional colors - olive, beige, and navy. I found the better part of a dark gray ball of yarn in my stash and paired it up with a cowl pattern I had saved on Ravelry. Cowls are good for riding because they don't come unwound, and I thought she would appreciate my effort to give her something neutral to wear. 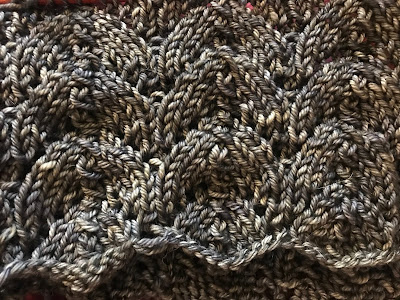 The motif is a Shetland one called horseshoe lace, which I consider appropriate both as a sign of luck and as a gift for a horsewoman. I really like the way it turned out with the marled gray yarn - despite my love of brights I do like me a nice gray. It looks fine unblocked, but stretching it out to about 12" x 12" on the board opened up the pattern and it looks even nicer. I also wanted to make sure that it was going to be wide enough to get it on and off over a helmet in case she decided mid-ride that it was warming up. 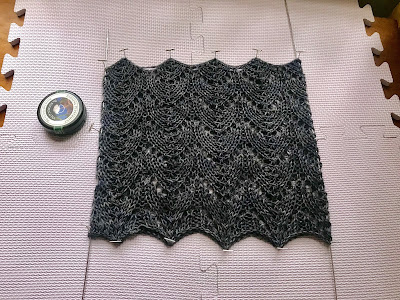 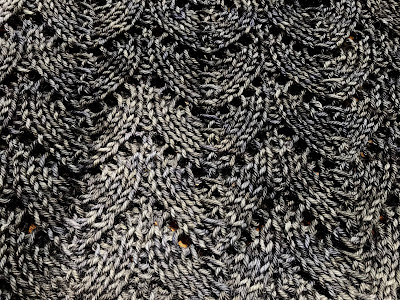 I did make one modification. Rather than mirroring the pattern so there were sets of horseshoes that faced one another, I just continued with them facing the same direction for all the repeats. I saw that some others had done that when I looked around on Ravelry and I liked the way it looked. I did get a note that she liked it, so I hope she ends up getting some use out of it if the mornings ever cool down again! 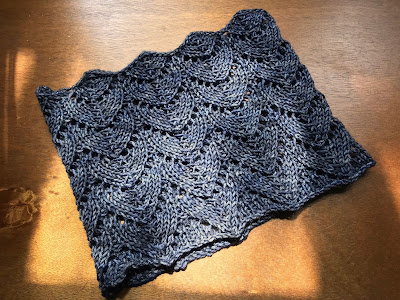