These shadow boxes are sort of old school, aren't they? Larraine had always wanted to get some of the ribbons her horses have earned in shadow boxes, so one day I pilfered Welti's photo and started grabbing ribbons and putting them in a bucket! Once everything was gathered together I had a lot of fun arranging and rearranging ribbons around his photo. They are just held on with short pins that I inserted as I went folding and overlapping until I liked what I saw. The pictures have been hanging up in the tack room at the barn for some time in frames that didn't really fit right and weren't very inspiring. I think this is a definite improvement! 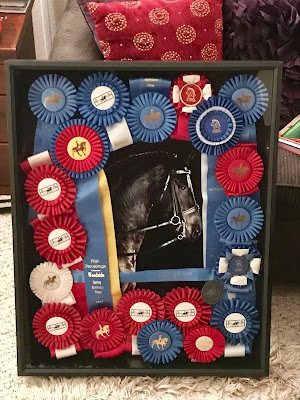 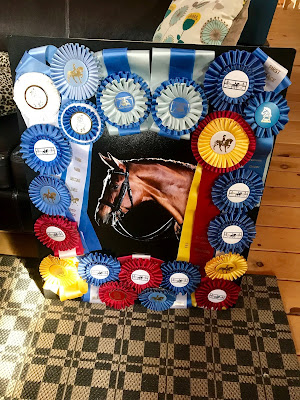 There was definitely a learning curve (don't put ribbons too close to the edge, put enough pins in, put the pins in the correct orientation or they'll fall out once it's standing up...) and the second one for Marcus went much quicker with the exception of needing to figure out how to affix a medal in his box. Answer: lots more pins. 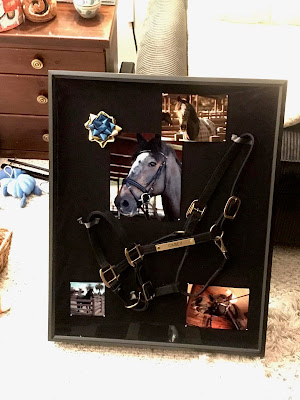 As we were cleaning things out of a storage pod, we found a halter for another of the horses who is a few years gone. He was around for a long time and he was SUCH a character that we decided to make him a box too. I printed out some photos of him and set them along with his halter. For lack of ribbons, I added a couple of shiny bows in blue, of course because he was a winner. :) The halter was a tough one because it's so heavy, but I used a few strips of adhesive velcro and then some short lengths of satin ribbon wrapped around the leather and pinned to the backing. It seems sturdy enough, but time will tell! 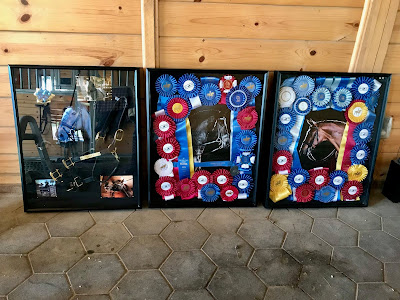 It was really fun for me to remember all the shows we've been to over the years and to put together such a special Christmas gift for one of my very best friends. She loved it! They are going to hang up in the aisle of her barn so everyone who comes by can see how awesome 'her boys' are.
Posted by Alia at 9:00 AM