About a year ago, Dave and I moved (temporarily) to The Netherlands. We relocated from Palo Alto to Amsterdam for three months to pursue fantastic opportunities to do research at an institute there. We remember our time there very fondly and continually talk about going back.

One of the most distinct things (of many) we remember about living there are colors. First off, AMOLF is housed in quite a new building, so the architecture and design inside is very modern. This includes hallways, walls, and couches in a stunningly bright green. You'd think this would be distracting, but really it was very energizing. It sounds hokey I know, and I would never believe something like that if someone told me. But, having experienced it I can vouch for it --- bright green is a great color for the workplace!

Another color that is associated inextricably with the Dutch is orange. Orange is the color of the ruling house, and has become a sort of national color. Did anyone see those amazing football uniforms in the last World Cup? Orange.

We were fortunate enough to have arrived shortly before a major event in The Netherlands, Queen's Day. We went into the city center to sit at our soon-to-be-favorite cafe on the canals the night before Queen's Day, and the city was awash with orange. Perhaps you can see the orange banners and balloons in the picture below. There were even special little cakes in the Albert Heijn bakeries iced with orange!


Since we've recently been 'pining for the fjords (canals)', so to speak, and I've been so inspired by the amazing modern quilting I've seen around the web, I have decided to make a quilt commemorating our time in Amsterdam. Such a clear color inspiration is almost cheating -- bright green and orange.

I have said before, as one does, that I am 'done' purchasing fabric for a while. That is mostly true, until I see great sales. The fabrics in the next photo were all purchased for 40-50% off at various shops because I could not resist a good deal, and they were the right colors for the job. Of course there are also others (to be shared at another time) that have nothing to do with this quilt or those colors but I had to have them anyway. What lack of will power! 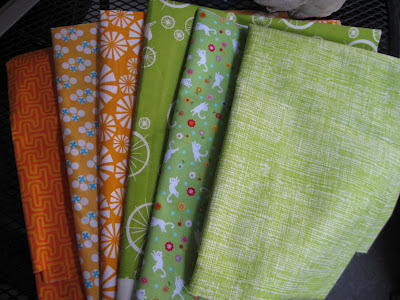 I especially like the green fabric with the little white cats; we missed our cat very much while we were away. The green with bike wheels with birds perched on them (which you cannot make out from this photo) is of course highly appropriate as I love birds and of course we rode bikes everywhere in Amsterdam.

I will also likely use the two beauties below that I bought in Los Gatos, and some more of that great green Ikea duvet cover fabric I recently used in my laundry room project. If anything says 'AMOLF walls', it's that fabric. 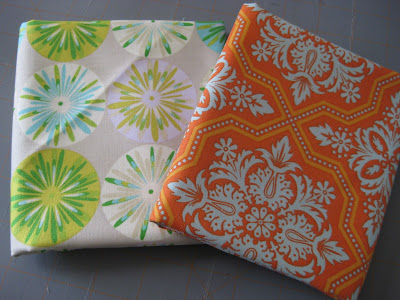 Next is the hardest part: choosing a pattern. I've been pondering this for a while, and I have settled on some sort of windmill-like quilt block. I've seen several types around the web, and even a sampler with many flavors of windmill blocks. I do think I want to stick with one block to keep it simple looking since the colors will be kind of crazy. There is a block called the Dutchman's Puzzle which ends up looking like windmill blades in the center if the colors are placed correctly. I'm gravitating towards that one, or there is a simpler block I'm thinking about, too.

Then of course there is the choice of background fabric. Definitely a solid, but what color? White or gray I think. We'll see what I end up choosing when the time rolls around. This quilt is going to rattle around in my head a bit more while I catch up on my Retro Flower quilt and probably make a few more little projects between. For now it is fun to dream up the possibilities!
Posted by Alia at 3:33 PM