Over the long Memorial Day weekend, we took a road trip up the coast to Portland. Well, really it was the 5, which is decidedly inland, but we did start and end on bodies of water. Ordinarily I don't consider vacations big crafty time for me, but this one ended up a little different.

I don't usually knit, crochet, or basically anything in the car but I decided I had taken enough Dramamine that perhaps I'd chance it. And so with 12 hours of driving each way, I managed some serious progress! I took two works in progress that have been languishing in my basket for a while. This strategy was a conscious decision, and boy did it work.

On the way up, I finished a crochet wrap I started a month or so ago using another of those free patterns from Mom. (The same source as the pattern for this cute little kimono sweater.) 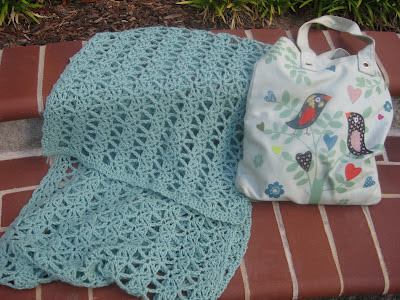 The pattern was unusual to start at first since it wasn't obvious to me how it was all going to work out into those columns of triangles, but after a few rows it started making sense. Super simple and easy to memorize, perfect for traveling. I actually took this and worked on the plane when we traveled to Kentucky in April, and had a lot of comments on it from ladies on the planes! 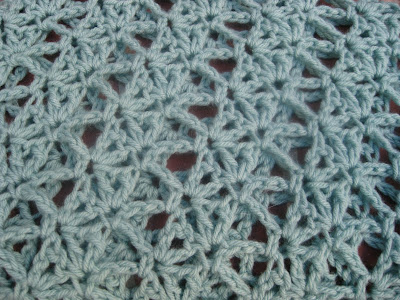 I love the color of this, it is a beautiful turquoise. I'm happy to have some of the yarn leftover. And once again, what a huge difference steam blocking made!

Thankfully I thought to take a second project along. I got a good chunk done of a double knitted scarf I've been working on for Dave. I did in fact start it when it was cold here... Have you ever tried double knitting? It's really fun but somehow I didn't realize beforehand that it would amount to making two scarves at the same time. It's slow going, twice as many stitches as it looks. 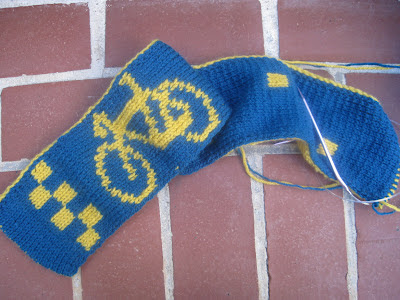 This scarf was inspired by our time living in Amsterdam, hence the bike. In fact the blue yarn is yarn I bought on a day trip we took to Delft. I found the bike chart on Ravelry from a hat pattern, and the rest I'm just making up as I go along. Hopefully it will be done by the time the cold comes through again! 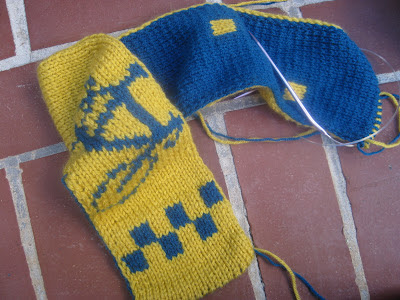 Maybe I need another road trip?