I worked on a couple of quilt blocks this past week, using stars as the inspiration. I found a couple patterns that were half-square triangle (HST) friendly since I wanted the construction to be relatively simple. Step one: cut a lot of squares and make a lot of HSTs! Chain piecing is my friend. 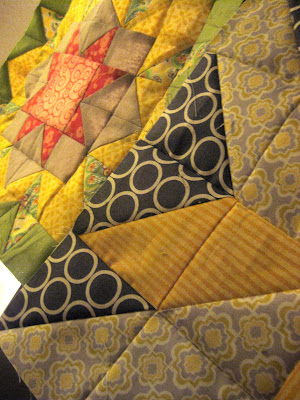 For this first block, I wanted to see if I could make a Swoon block out of all HSTs that would end up being 12.5" square -- I basically looked at how many squares would be across the block, divided and cut my squares appropriately. The astute reader will notice this is not a Swoon, since the base of the yellow petals are actually indented instead of flat. I found a block called the Carpenter's star that is most often shown with alternating colors of diamonds around the outside to form the petals. (Google carpenter's star block and look at the images, and you'll see what I mean). I just took the color layout for Swoon, applied it to this, and ended up with a swooning carpenter! Or something like that. Most of my points match up.... next time I will strive to be more careful about that. But really, it was a LOT of triangles, so a few oddballs here and there don't bug me. 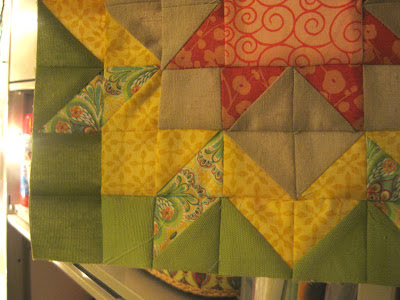 The second block is my favorite. It is called a Spinning Star, and I am seriously considering re-thinking my Amsterdam quilt to use this block instead of what I've started. I love how it looks like a pinwheel and star all wrapped up in one. Also, the gray and yellow looks pretty much awesome but I think this would work well with the orange and green scheme, too. This block was much easier to process and put together. There are many fewer pieces (by a factor of 4!) so it was faster and the larger HSTs made point matching much nicer. 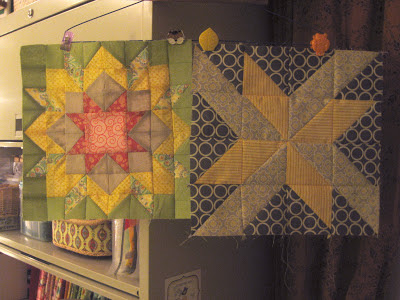 Aside from being super pleased with the way these look, I am also amazed that I managed to make these completely from scraps! I know! Those jars on my shelf are actually serving a purpose -- first coasters, now quilt blocks.
Posted by Alia at 8:00 AM