The simplicity of that phrase belies the fact that it can be interpreted in two ways: knits as a noun or an adjective. "Knits on planes" sounds like a sensational movie title while "knits on planes" as a descriptive phrase is more of a line item in the notes from a psychiatric interview. As in: "subject displays compulsive crafty behavior... knits on planes." Both are apt descriptions of the essence of this post. I was in fact knitting on planes, and my knits were on planes. Three little words, so much meaning. I digress. 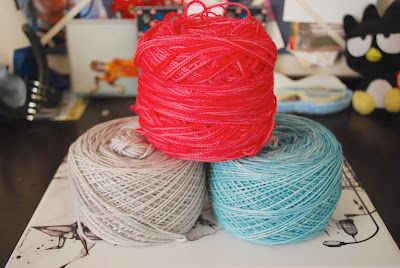 I purchased this yarn at my lovely LYS Nine Rubies Knitting near the beginning of the year, and I was good and waited until I finished the baby quilt and sweater for my friend Anna before digging into it and casting on my intended project. Newton was not quite as disciplined, you can see the pink ball above looks a little raggedy -- it was wrapped around the kitchen chairs several times one morning and needed to be rewound a bit. Silly kitten. The yarn is Baah! by La Jolla and I must say I am really loving it. The strands are tightly twisted with satisfying regularity and the colors are saturated.

This month I've been traveling a lot. I usually take my Kindle to read books and my iPad with patterns and some yarn to be able to knit but I was in the middle neither of a book nor a knitting project. So I started my new project a couple days before I flew out and worked on it this month on 4 cross country flights from the West Coast to East. Phew! That's a lot of knitting hours. I'm probably about halfway done. 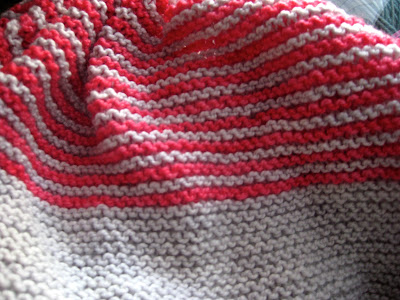 The pattern is Color Affection by Veera Valimaki and is a lovely asymmetrical garter stitch shawl whose stripes lend themselves well to any number of striking color combinations. Mine is feeling a little bit "Miami" right now with the bright pink. But really I couldn't resist a color named "Flamingo Pink" given my love of the gangly pink birds. We'll see what happens when I add in the blue! I do like each of these colors separately, and I think they'll look neat together. Dave had to talk me out of getting a bright green instead of the blue. Not sure what his issue was, but he sure did make a face when I held up the three hanks together. I was thinking "tulips" he was thinking "yikes!" This shawl, much like the title of this post, has some hidden complexity despite the apparent simplicity of garter stitch stripes. It has short rows! This will be my first time working this technique, but really it doesn't seem all that complicated. It does end up having quite the visual impact on the finished product, though. I'm looking forward to starting those in a couple more rows and seeing how they work.

I love knitting while traveling. While on a layover at O'Hare, a woman next to me struck up a conversation about the colors I chose. She was quite friendly, and as it turns out her husband was also searching for faculty jobs and they were returning from an interview, too! The three of us had a great time chatting about the trials and tribulations, but also the excitement. And as another hilarious example of the smallness of the world, the husband had met my best friend from college while working at Stanford for a short period of time -- in the same lab. See? Never would have talked to them if I didn't have my yarn to say a visual "hello". They even watched my things while I walked down the terminal to go buy a Shamrock shake from McDonald's. Way to go, yarn, way to go. 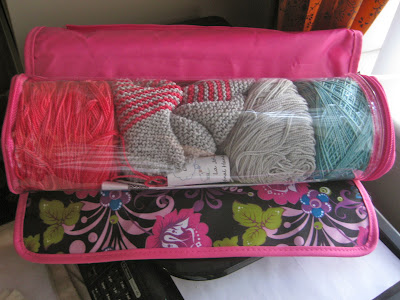 My sister-in-law gifted me this fabulous project tote for the holidays this year along with yarn markers and row counters. The part that is folded back has pockets for needles and hooks, and it rolls over to snap shut around the yarn compartment to form a little log with a handle on the top for easy carrying. Love it. My yarn cakes fit in perfectly and it is really convenient to just leave them in there while I stitch away. They don't get tangled up from rolling around like they might in just a regular tote bag (speaking from experience...). As an added bonus it fits perfectly into my carry on bag that ends up under the seat in front of me, so no digging around before stowing my luggage in the overhead bins. And strangers can see the colors you're working with and talk to you about them. And enable you to purchase milkshakes. Thank you, Li!

Now that I'm back home I'm working more with fabric and sewing, but in the late hours of the evening I still sit down for a few more rows on this. I really would like to wear it this Spring!
Posted by Alia at 7:00 AM