a design wall at last

OMG this last Sunday Dave did a thing. And it's an awesome thing! I have a design wall in my craft room!! I'm still not sure where the sewing machine will end up, but what I do know is that I'm glad we waited to get any more furniture in here so we could end up deciding to do this. We had discussed how and where to try a design wall - do we use foam board from the hardware store, or try to get display boards from Staples, should it go over the cabinet on the other wall, on the closet, or somewhere else. In the end, Dave was very clever and just taped a couple of our largest moving boxes together. We covered it with a flannel flat sheet we aren't going to use on the bed anymore and put it on the biggest open wall we had. The bottom part is loose and that's because we just let the extra hang down past the boxes when we nailed it to the wall. Boom. Lightweight, pinnable if I need to, and the flannel is worn so it's nice and sticky. Also, free. So exciting. 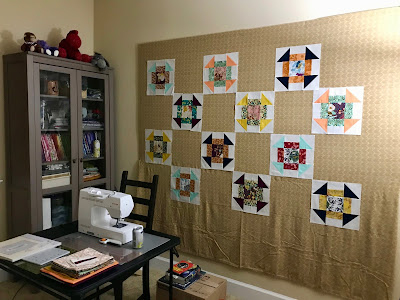 I have always envied quilters and craft room pictures with great big design walls. Moving things around on the floor or in sketches is very good, but I don't think there's any replacement for being able to put the actual pieces up and really let them hang out (no pun intended) for a while. It seems like it can make the whole final assembly/layout process so much more thoughtful. For me that's always the "oh well let's just get it sewn together and see what happens" part. But now I have a glorious, huge, amazing space on my wall. For example, I thought I was going to just sew my churn dashes together to make a small quilt, but now I'm playing around with making it bigger. 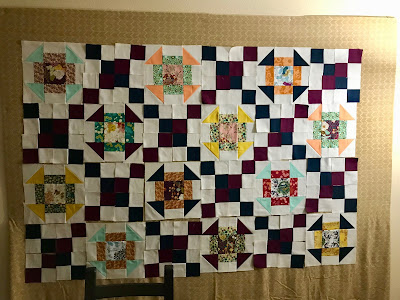 It took me some time to decide what blocks I wanted to fill in with. I want this to be more of a traditional looking fall-ish quilt so I made some four patches and stuck with the darker colors, navy and magenta. I really wish I had some burnt orange to use instead of the magenta, but I am making this from my stash and I didn't think the bright peach would keep it looking like fall. So magenta it is.

I also messed around with the orientation of the four patches. The one above makes some interesting secondary patterns where churn dash and patchwork block corners meet (that I would not have seen had I not been able to take a few steps back), whereas the one below is very different. It feels more traditional to me, probably because of the checkerboards. I also felt like the churn dashes got lost a little bit more, so I stuck with the first layout. 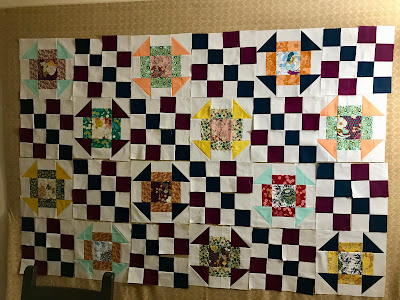 The issue I was having with the first option was that the parts were the four patches all met in the middle of each 12 inch filler block was very dark and heavy feeling. (The dim pictures don't help, but it was nighttime and I wanted to keep working). Those visually took over, but the way the background ended up framed the churn dashes really nicely. My solution was to take a brighter fabric, a yellow print from the Indie collection, and add a triangle to one square in each four patch where they met. This makes a little sparkly diamond at those heavy intersections and lightens things up a bit. I also like the way the on point square echoes the angles of the churn dashes. 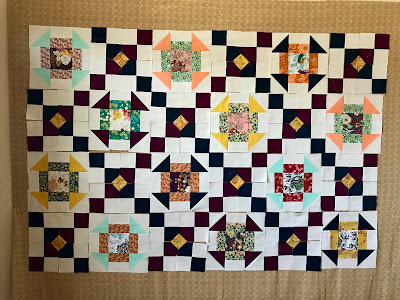 See? Already I'm finding this whole thing very useful for thoughtful quilt assembly. It's not quite what I had imagined initially, but it's fun to follow wherever whim is taking me right now!
Posted by Alia at 7:52 AM