Last week I hit a milestone on my Forest Fog blanket - I finished the middle panel! This has been a long time coming, and I'm pleased with how it's looking so far. 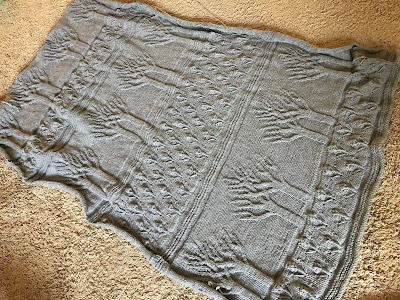 Mine is a bit different than the pattern called for. It is supposed to start with trees instead of flowers at the bottom, and then alternate tree/flowers/tree/flowers/tree but I read the pattern wrong and started in the wrong place. In my defense, I do think it was a little bit confusing the way it was written. Regardless, I had gotten pretty far through the flower section before I realized it, and I didn't want to rip back. Instead, I decided to take the two flower panel sections and split one in half so that there were still three tree panels but each of them were sitting above a field of flowers. I ended up with the same number of rows by also slightly modifying a couple of the divider sections as well. Easy! 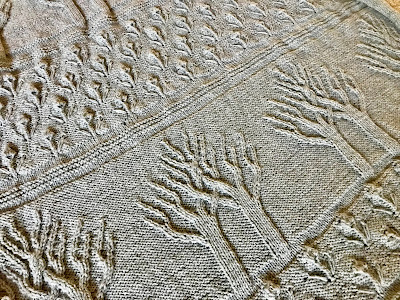 I don't think that will matter very much in the final product, it still looks really nice and will shape up even better after blocking. The trees look much harder than they are, but they did take a lot of concentration to keep track of where I was in the pattern.

The next step is the border, which is knitted separately and sewn on. I did consider the idea of knitting it on as I go, but after doing that with the shetland shawl forever I didn't really want to do it again with this. Plus, I'm not sure how many repeats I'll need, where on the edge I should start it, or how I want to do the corners so I'm sticking with sewing it on after the fact. It's a pretty leaf pattern - I still need to look at the pattern each row so it's not super fast going, but I've already got 10 repeats done. Can't wait to see how this next stage goes! 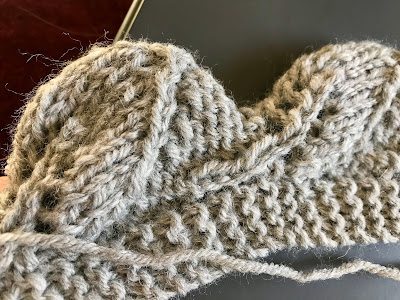