Well here it is, my second wall hanging for the house. My Halloween pumpkin patch finished up rather quickly once we moved in, but it took longer for the next to come around. The holiday horses are still basted and folded...... 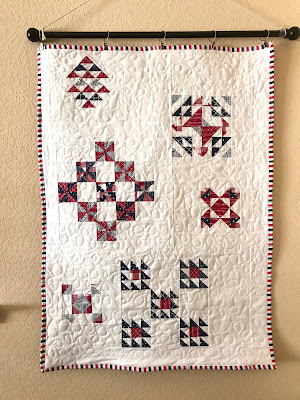 I used this little piece of improv as the experimental first voyage of the quilting frame Dave got me for my birthday last fall. It took a bit of fiddling to set everything up, but now that the bits and pieces are assembled it should be quicker the next time around. I have to say, I think it’s going to be great once I get used to it. I’m very good at drawing, but less good at drawing while moving the paper instead of the pen. That is how this works, in contrast to a long arm where you move the needle like you do when you draw on paper. 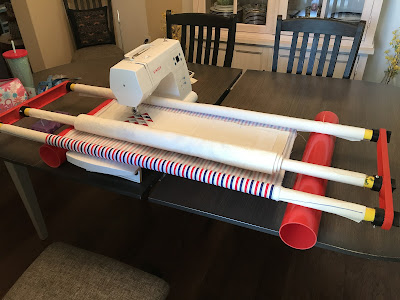 I had grand plans of doing a bunch of straight lines to echo different blocks, but decided to opt for a loopy all over design while I got used to driving the new contraption. It was a bit of a chore to get tension right - definitely had it right for two passes and then had to take out the next FOUR because of snarly thread on the back. In the end I put the machine back on AUTO and it worked out fine. I read somewhere that you needed to take it off of auto and ramp up the tension for it to work right. That seemed to work out in the beginning but I made a small adjustment partway through and BAM. Snarly thread. 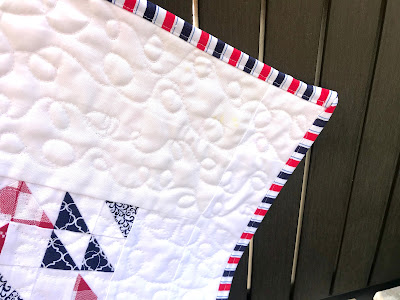 I found this great striped fabric for the backing and bought enough so I had plenty left for binding. Gotta love a stripe for binding. It also hides some of the imperfections from the machine quilting on the back, even with the white thread. That’s the side against the wall anyway, right?? Like I said, the quilt frame is going to take some getting used to. 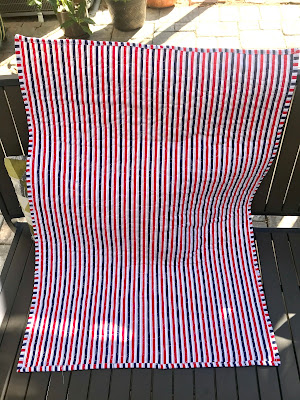 While it wasn’t the geometric coup I had in mind, I do think it’s pretty festive looking. The loops give it lots of texture and actually contrast with the highly angular patchwork pretty well. I suppose if you squint they could look like fireworks. And it’s done in time for Independence Day! Score one point for me. 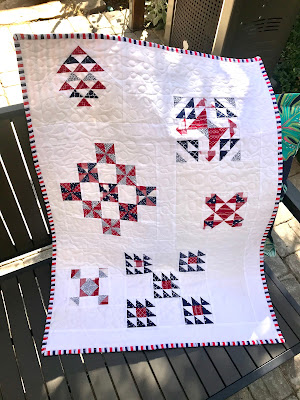