My super big purple and teal monster is done! Well, the top anyway. I did make the pieced borders like in the pattern, but since my blocks ended up a smidge smaller than they were meant to and the borders were (ahem) perfect, they didn’t line up. I definitely could have fiddled with them to make it work but instead I opted to skip that part and do as wide of a border as I could with what I had left of my favorite purple print. The pieced border? I’m going to try to use it as a really interesting binding for this. 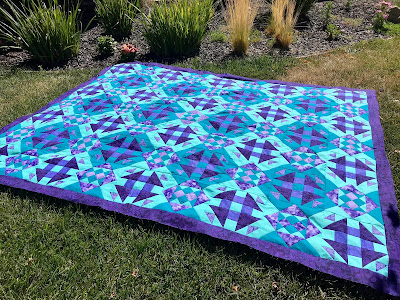 The pattern I’ve used is called Eiderdown by Larissa Keys and I distinctly remember buying it at the local quilt shop down here just about a year ago when Dave and I first came down to check out the town. It’s so funny how life works out! From a quilt pattern to a house... 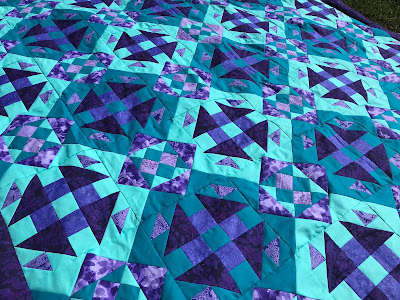 We went through a period where we were listening to a lot of Sting (my favorite) which coincided with the making of this quilt top. Somehow that combined with the ocean-ish feel of the teal background made me think of turtles and “I Dream of Blue Turtles” sort of popped into my head as a name that seems to have stuck (Sting’s first solo album is The Dream of the Blue Turtles). I’m considering trying out the longarm quilting services of another quilt shop we’ve recently discovered and I do think they can do an edge to edge turtle pattern. How cool would that be? 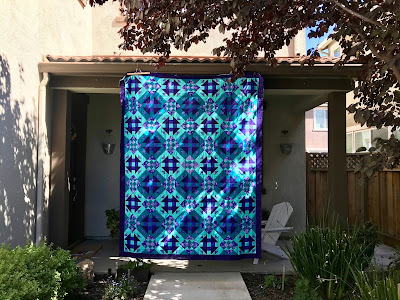 It’s ended up measuring just about 80” x 100” and was so large I had to have Dave hang it up on the porch by the gutters so I could get a good picture of the whole thing. I’m really enjoying the traditional blocks with quite unconventional, bright colors. And also the fact that we’ve got a porch :)
Posted by Alia at 10:05 PM