At some point I'll start quilting all these tops, but at the moment I'm having a lot of fun piecing them. This top for my brother didn't take very long at all. It was a really fun one to put together, too. The design is made up of exclusively half-square triangles which makes this kind of quilt really appealing for playing with layout and geometric designs. The overall look is quite different than the Nordic Triangles design that I used but that is the exciting part of playing with color and values. I'm loving the colors together, and the combination of the solids with the ikat prints (and one polka dot) is really nice. I might try some more solid-only work in the future because those parts are my favorite sections of this quilt. 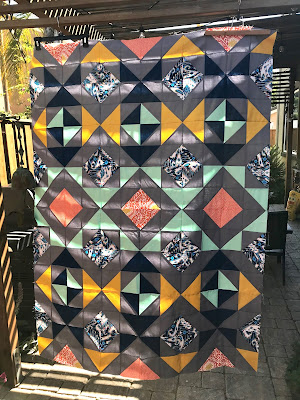 Instead of assembling it together row by row I chose to make four patches, then four patches of those four patches, etc. until I came to the point where I was assembling three large rows. I think this helped me keep track of my points better than a row by row assembly would have done, especially because I did not trim/square up the HSTs after I made them all. 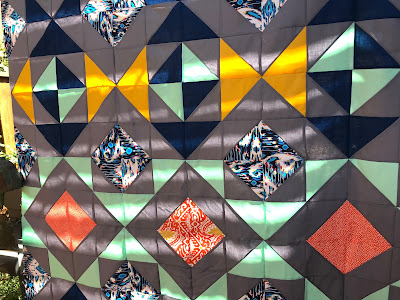 I'll have to think a little bit on how I want to quilt it. It's just a smidge too large for my fmq gadget so I'll be doing it the "old" way which probably means a lot of straight lines coming my way. It's gonna be so fun to get the minion backing on, and I even found some great minion eyes print for the binding. Hehehehe.
Posted by Alia at 9:30 AM