Last Christmas I got some awesome gloves from my mom. They are almost elbow length and have two parts: gloves with fingers, and a separate layer over that without fingers. I found that the fingerless part is great to wear to the lab whenever it is cold enough to want just a little extra around my hands. Our lab gets cold, even when it's nice out. A coworker of mine took a liking to them, and asked if I knew how to make something like that. Well yes, probably! I had never used double pointed needles before, but I figured how hard could it be. It was fun to learn.

These fingerless gloves were a really fun project that took way longer than they should have. I started them in February (yikes!) but ended up putting them aside when my nieces' birthdays came around so I could work on sweaters for them. The pattern is free on Ravelry and not all that difficult; highly recommend. I did omit the thumb gusset in favor of simply binding off stitches and adding them back the next row, and I stopped the pattern earlier because otherwise I think they would go too far up the fingers. The self striping yarn from Paton's turned out to look pretty nice. My only comment is it's a little bit scratchy for my taste, and I'm completely unconvinced this yarn could actually be used for socks as advertised. Itchy feet, not my thing. For the gloves though, it works. 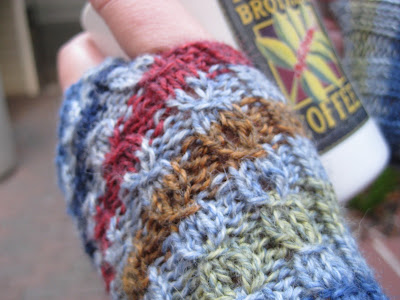 Saying the recipient is outdoorsy is an understatement, so I think these will look great with hiking boots and backpacks pretty much anywhere. I probably could have been more detailed and knit them to match, but I kind of like the mismatched look. In fact, I spaced out on the second glove and knit the little cable motifs all the way around the first time it was worked. By the time I noticed I didn't really want to take out all those rows so I left it. I actually think it adds character. Ahem. But really it does look pretty cool. I'd add that in for both gloves if I end up using this pattern again. All in all, I'm really happy with this finish. Hope they are a hit! 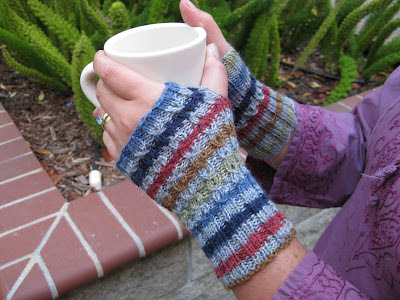