I finished the top to my latest quilt project. That makes it about halfway through September, and I've got another two weeks to go before it needs to be done. I love the simplicity of square patchwork because it's fast, and it also is great to feature a lot of favorite prints. The Aviary Picnic Patchwork quilt I made was a super simple combination of linen and "Aviary 2" from Joel Dewberry. Here I added another layer of interest by making 4-patches and 9-patches, and I mixed and matched a bunch of prints using the Bike It fabric from Birch Fabrics "Commute" as inspiration. 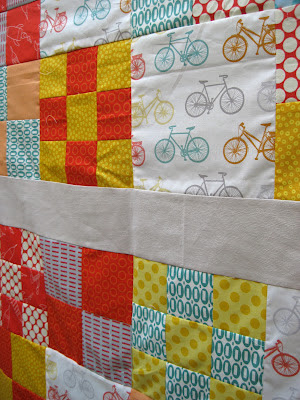 Originally, I planned to do an 8 by 8 grid of blocks but when I had it all laid out on the floor it was too busy. I was kind of disappointed. I had mocked it up in Powerpoint to be sure my patchwork patterns were well mixed, but what I did not have in that sketch was the prints. Turns out a lot of my prints are of similar scale, and the squares in the 9 patches especially are about the same size as the bicycles on the feature print. I think this is why everything was getting lost.

My solution? Linen! That wonderful neutral yet rugged and textured giver of negative space. I took out my last row of blocks to save for later (yeah leftovers!) and in its place added two horizontal sashes of linen. Now everything is popping, especially those bicyles. It's amazing what even just a little bit of solid does to a design. I'm learning all the time! 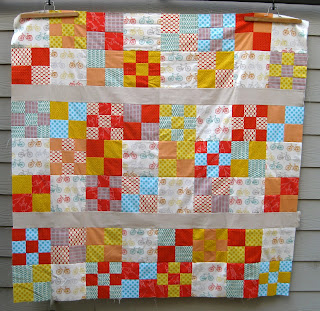 Last Friday we popped into IKEA to wait out rush hour traffic on the way home and I found this great print on sale in the fabric department. Only 8 dollars for enough fabric to back a quilt? Why yes, please.  It's even a little bit heavier weight, more like a twill, so the back will be pretty sturdy. This combined with the gray and white Metro Circles print is going to make a great finish for this quilt. 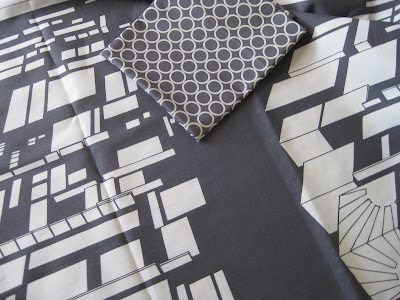 Linking up to Freshly Pieced: