This latest finish is a satisfying stash buster that took me just a couple of days to work up. I'd been browsing around my Ravelry favorites for new smaller projects to work on post mittens and cotton rounds, and after the process of reorganizing my stash last weekend I found a good set of worsted weight yarns that wanted to be worked up together. (Apparently my brain doesn't want to start that last border on the Shetland shawl just yet!) 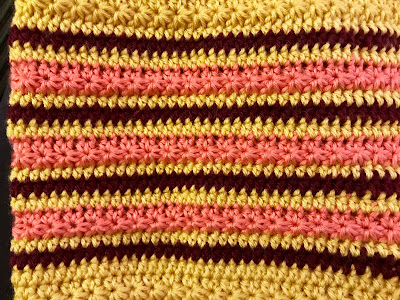 I chose a cool crochet pattern I'd had saved and modified it a bit. First, I made it significantly shorter. Rather than starting out with over 200 stitches per round I did just 81. My first row of foundation hdc gave me enough of an idea of circumference to know that number would be a snug fit rather than one that needed to be wrapped multiple times. Then I decided to play yarn chicken. The pattern calls for only one color and only three repeats of the star stitch stripe. I chose three colors and kept going until I thought I would run out of them. I ended up with five star stitch stripes and managed to use up all of the yellow and most of the other two colors (just a few yards left to accent another project). What a lucky thing! 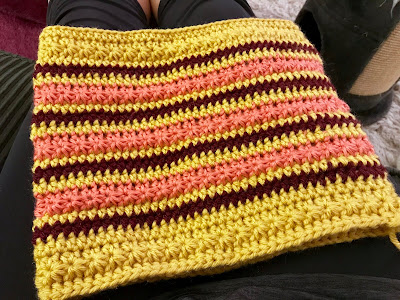 The result is a sturdy cowl that will stand up around the neck on its own. It's a little bit Gryffindor with the maroon and yellow stripes, but the coral stars bring it back to looking like autumn to me so I'm calling it Harvest. I'd totally make this again, multi colored or solid. The rows just fly by and I really like the star stitch!