Yep, more leftovers. These are lovely alpaca blend yarns leftover from a scarf gift a couple Christmases ago. I thought a logical follow up to all the mittens I've been knitting lately would be hats. Of course this doesn't match any of the mittens I've made but that isn't the point, is it? This project was a fun way to spend a Sunday afternoon. 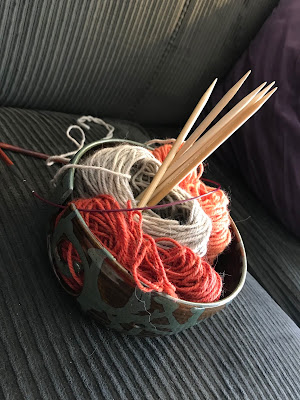 I really wanted to make a hat with a contrast double brim. I'm not sure where I got this idea but it got in my head and wouldn't go anywhere even when it got hard to find a pattern. I blame Pinterest, probably fair. I did eventually find a pattern ("A Very PDX Hat") on Ravelry. Truth be told, working the first rows in the round off of the provisional cast on was a royal pain in the rear but the brim turned out looking so great that I'll just have to suffer through again on another hat. It's just too cool. Maybe it was that my circulars were a little too long, hard to say. Or maybe it really is just a pain in the butt. Either way, the result was worth it. 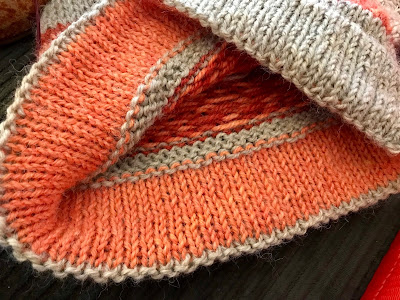 I thought I would settle in to make the whole thing in the barley color with the peachy inner brim and that would be it. Then I thought maybe I'd just do the whole thing in stockinette instead of the PDX ribbed pattern to keep it simple, and I'd put a navy pompom on top. But then I've been on a stranded knitting kick lately, haven't I? And there is that very pretty dark orange begging to be used. So here we have the mashup of two patterns, one for the band pattern and the other to tell me how to shape the hat. I was trying to make a fitted beanie for myself so I was conservative on how long to go before the crown decreases. Silly me, I tried it on and it fit just ok instead of great so I ended up ripping back and adding another inch. Then of course, it was a little more slouchy than I wanted. Never happy! 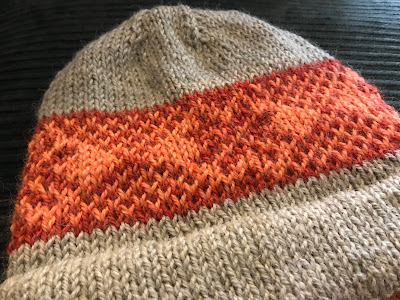 The real irony is that Dave came home at that point and commented how nice it looked, so I let him try it on. It fit perfectly. Guess who is getting another hat? And there goes the navy pompom idea down the drain. Really it tickles me that he likes it so much, so it's no problem at all. I was tempted to cast on for another, but matching hats might be a little bit much, even for us. Maybe I'll just borrow it once in a while! 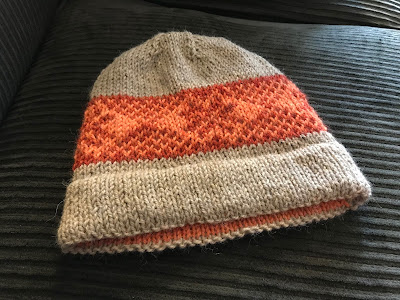 Pattern: A Very PDX Hat (shaping and brim) and Magnus' Hat (band pattern) - my Ravelry page
Needles: US 7 and US 8
Yarn: Berocco Ultra Alpaca in 'Grove Mix', 'Persimmon', and 'Barley'