I'm very proud of myself after this finish because I feel like I learned so much along the way. I've knitted socks with heel flaps before, but I don't think it made much sense to me in terms of "sections" of the sock until this project where I made each section with a different color. Working the contrasting heel flap and figuring out where to pick up the stitches to continue in the pink led to an aha moment for me, which is nice. Also working with three colors and a pattern that looks complicated (but isn't really, shhh!) and turns out looking like this is really rewarding! 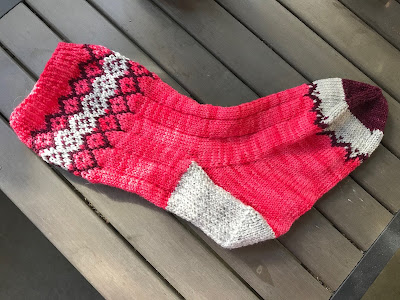 The first sock looks very well planned out and super cute with this little toe cap of purple. I wasn't thinking of doing the contrasting heel flap originally, but it turned out really good that I did because the pink didn't go as far as I thought it would on the second sock! But because I did that, I didn't think I'd have enough gray to do both toes completely so I randomly picked a place on the toe to switch colors. 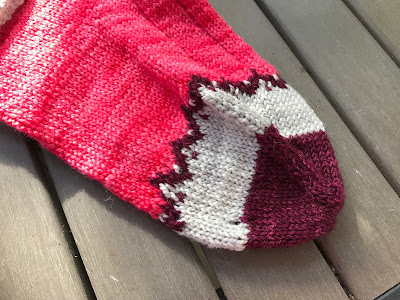 I kind of wish I had planned my yarn use better so I would have a matching pair - I like the first sock so very much. But I tried and missed, that's ok. The goal was really to use up the leftovers, and that I did. I ran out of pink on the second sock much sooner than I would have guessed, so I just filled in with the purple. Then on the toe I kept knitting with the gray until I ran out, so the toes are also mismatched. But if they are in shoes, who can tell ;)

Interesting thing about the fair isle band at the top - I knitted a little bit tighter on the second sock since the first was a little loose, and behold I started to see a 'dominant color' effect in the pattern that I didn't have with the looser knit first one. Arne and Carlos insist that there is no such thing as a dominant color, just tension problems, and now I understand what they're saying. Whether there is legitimately dominant color in fair isle knitting or not doesn't matter to me, who am I to say after all, but it was certainly interesting to see the difference I got just from a change in tension. 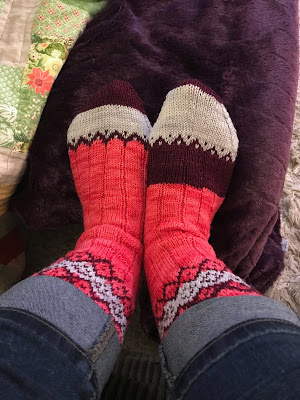 They are not as snug as I would prefer them to be, so next time I know to cast on fewer stitches. I was worried I was going to cut off my circulation with the fair isle section if I did anything smaller, but I guess I was wrong! They still work though and will be able to go on over riding breeches which is a plus. I think the socks that have the heel flap and heel gusset like this rather than the afterthought heel I've been doing will also be bigger around the ankle on the natural, so I'll file that lesson away for later use. It makes sense when you think about it, but I just didn't. 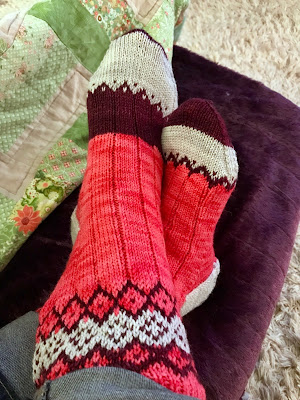 Pretty pleased with the way they turned out even with the mismatched feet. I'm also happy to have used up two of my leftover balls of yarn. Onward to the next stash buster!

Pattern: Border Socks by Mary Jane Mucklestone (my Ravelry page)
Needle: US 2 and 2.5 (2.75 mm and 3 mm)
Yarn: Baah! La Jolla in 'flamingo pink' and 'grey onyx' and Serendipidye Kings Mountain Sock in 'claret'
Posted by Alia at 9:02 AM