Tomorrowland is the name of this Regia color way. It is also an area of Disney's Magic Kingdom, which was what I thought it was referring to when I bought it. Bright colors, space-ish and fun. Works, right? Well it turns out that Tomorrowland is ALSO a music festival. Not just any festival, an electronic dance music festival in Belgium. I guess Regia made a line of festival inspired colors and an EDM festival managed to make the list. This is awesome. 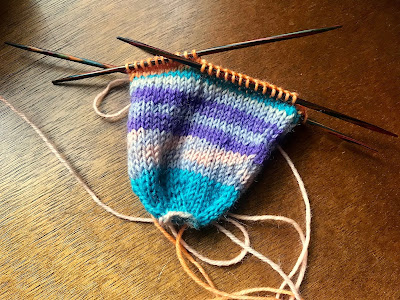 The other thing that is awesome is this teddy bear. When I got to the point where the legs and arms are attached, all was looking good and actually like a bear even if it was just a little bit creepy. I was worried at the outset that I was going to have to deal with annoying holes at joints similar to whenever I make fingers or thumbs on gloves and mittens. It's like my least favorite thing about knitting. The way this pattern works though, that isn't even an issue. I was really pleased when I got to the body and the legs just went on like magic. There is a seam to close, but it's not trying to not be a seam which is my issue with the annoying between-finger-holes. 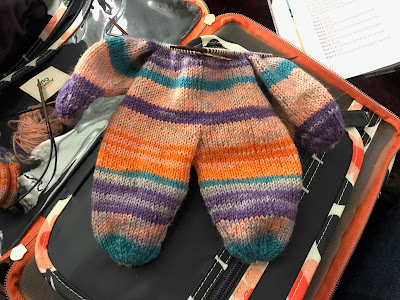 The going got tougher for me when I started stuffing. I may have filled up to a level that was too close to where I was working and so it just got physically harder for me to knit because the fabric was less flexible. Next time I'll try keeping things more flexible by stuffing less full at each point and filling more in later, but you do get to point with closing up the head and snout where it just is a pain in the neck and you have to tough it out.

The super neat thing about the way this pattern is written is that it makes you look like such a pro. I was wondering from all the pictures how the join with the arms and body had those continuous stripes that were all matched up through the chest and shoulders. I didn't even have to think about it to get it to look like that. But sshhhh we won't tell. 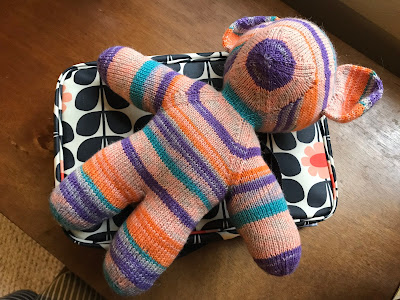 According to my notebook, it took me ten days from start to ears attached. That's not bad at all. I was even working on some other things in there, so I bet I could get one done in a week of monogamous knitting. Knowing that really only matters if I'm making one as a gift on a deadline; it isn't a race after all. I did decide when I got the yarn that I wanted to make one for each of my nieces for the holidays, but I think these may end up being birthday gifts instead given that I still need to do the second one and I'm enjoying some other holiday themed knitting at the moment. We'll see. Either way these will be pretty cool gifts.

I have to say I was thinking to myself that I was more than a little bit crazy for mentally committing myself to making one of these bears, let alone two, but it has turned out to be much easier than I expected. That's not to say this wasn't a challenge and a learning experience, but look! He's so cute. I'll stitch on his face when I finish the second bear, but I'm calling this one done. 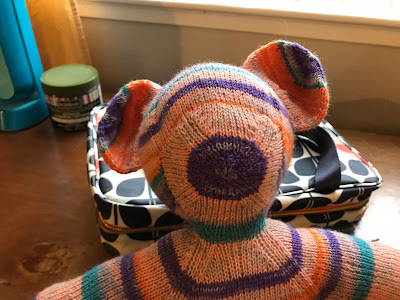