These things are like Pringles. Once you pop you can't stop. They even stack up nice and neat. I wonder if they'd fit in a Pringles tube.... For serious though, these Christmas balls are so much fun to make. I expect this space to be filled with pictures and posts of these guys well through the holidays. Maybe even into January. 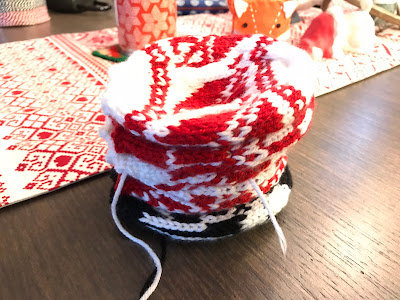 They are the perfect instant gratification project that is also skill building. I can finish a ball in just a couple of hours and each time I work a different pattern I try different ways of working the stranded knitting, even sometimes within the same ball. One strand on each index finger, holding only one strand at a time, holding both strands on one finger, continental style, english style.... you get the idea. I find that I'm quickest with one strand on each index finger when there is a lot of color switching going on but that the backs of my hands start to hurt sometimes when I do it that way. I think it all just takes practice to feel comfortable, kind of like when I first learned how to knit and it felt totally foreign compared to a crochet hook. 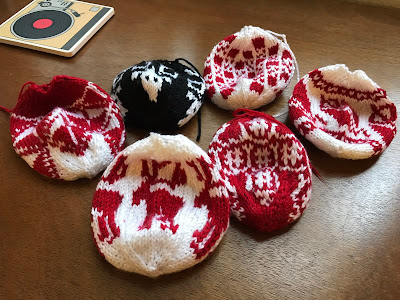 The way I've done these so far is to knit up a stack of them along with their hanger loops and then sit down and stuff a bunch of them all at once. For someone who never liked the finishing stage (weaving ends, blocking, closing holes, etc.) it's really quite satisfying to finish these little guys up and get them hanging. I think they have changed me! 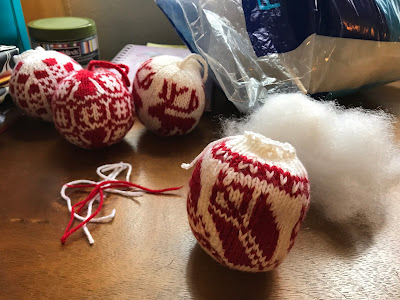 After a nice steam and a stuff they are ready to hang up. A single one is impressive, but I think they look rather fun in groups. Herds? When starting out, I thought these would be small, but they end up actually quite big, about 4 inches in diameter, which makes them about the size of a typical glass ball ornament. 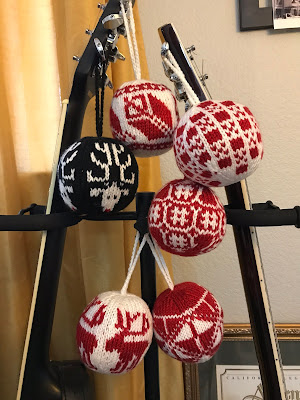 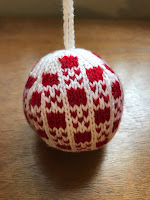 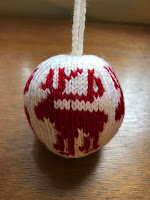 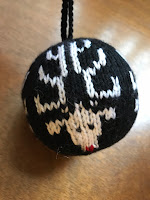 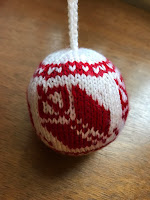 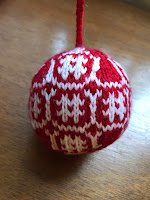 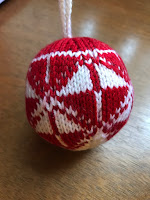 The way I knit each ball takes up about 15 grams or so of yarn, that's about 40 yards in the kind of yarn I'm using. I haven't done that many with the black (just the one) but as I do more I think the black will make additional appearances. I also have some sparkly embroidery thread that I'd like to play with as well, probably just for duplicate stitching rather than trying to knit with it. Paired with the black and white that might make for an elegant ornament. Until next ball update, here's my happy little pile. 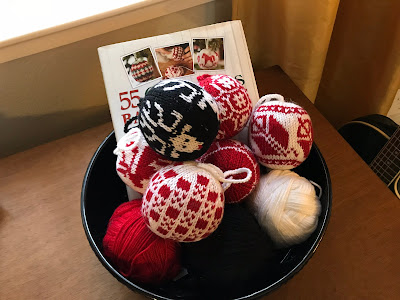