I love these poofs. I attached gold pom poms to the edge of my mosaic throw and it was just what the project needed. The extra pop of color sets off the mosaic nicely and their texture and floppiness give it a whimsical finish. Because it is a crochet fabric it can tend to be a little bit stiff, but the weight of the pom poms on the edges help to get it to drape. 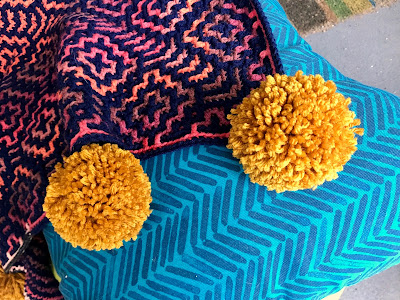 I ended up taking the eight pom poms and splitting them evenly down two sides of my mosaic square.  The diamond pattern gave me a handy guide to help with spacing, and I just tied them on with yarn pulled through the center of each ball. This evening I made some more pom poms in peach and a slightly smaller size (2.5") to consider adding in between the gold ones, but after attaching one side with some temporary knots I decided against it. I really like just the gold, and it was *gasp* just too much pom pom. 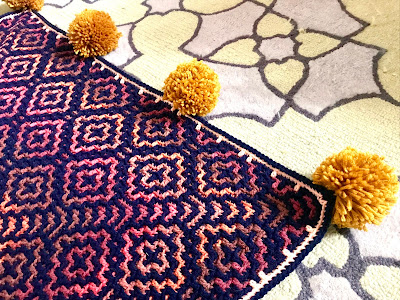 Overall I enjoyed making it and learning this new crochet technique. The finished fabric looks super impressive and this was a perfect use of a self striping Caron cake. I like the slant rhyme to primary colors that I ended up with after adding the gold, and I think the navy was a great choice for a background color to contrast with all the peaches, pinks, and browns in the cake. 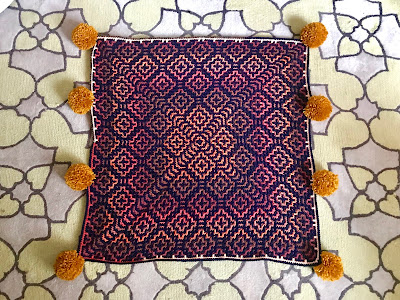 I really like Dave's suggestion to use this as a lap throw. It isn't really a blanket but it covers my legs down to my ankles on the couch which is just enough to keep me cozy. I can't help but think that this would totally look cute thrown over the back of a llama. Maybe it's all the llama prints I've been seeing around lately... no llamas here, so I'll be keeping it for myself. 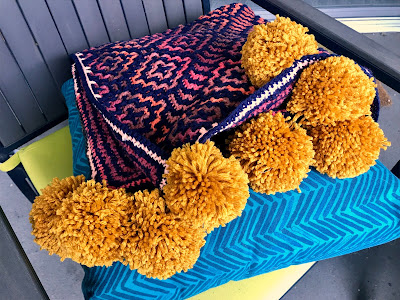